A bandit leader who claimed to have repented and surrendered his weapons has shockingly returned to the forest. 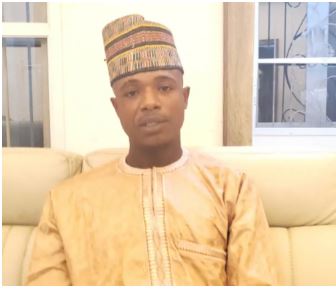 Auwal Daudawa
A notorious kidnapper and bandit leader, Auwal Daudawa has reportedly returned to his former way of life weeks after claiming that he had repented.
The bandit leader in Zamfara State, who is said to have masterminded the abduction of over 300 students in neighbouring Katsina State on December 12, 2020 had repented and surrendered his arms to the government.
Weeks after the boys were released, Daudawa and five of his lieutenants surrendered 20 AK 47 rifles, ammunition and a rocket-propelled grenade (RPG) launcher to the Zamfara state government on Monday, February 8. They denounced their affiliation to the bandits and promised never to go back to the crime. Read here.
However, a report by DailyTrust claims Daudawa has returned to the forest to pick up arms. According to the report, Daudawa reportedly packed his family and his lieutenants back to Jaja forest in Zurmi Local Government on Monday, April 26.
“He called one of his contacts in Gusau to inform him that he had arrived at the forest and decided to pick up arms again. He did not inform anybody before he left” a source said
The report states that Daudawa was said to have been frustrated by the lack of proper engagement after he had laid down his arms. He and members of his gang who repented were housed in a government chalet for weeks before a house was secured for him in Damba, in the outskirts of Gusau, to move in with his family.
“His upkeep was being shouldered by the government. I don’t know what it was he needed. Perhaps his tall expectations were not met,” one security source in Gusau disclosed.
Security analysts in the state say Daudawa's action is a major setback for the peace deal and amnesty for bandits being championed by the Zamfara State Governor, Bello Matawalle.
Top Stories