According to her, her attackers were paid F250,000 with an advance payment of 50,000f to pour to carry out their deadly attack. 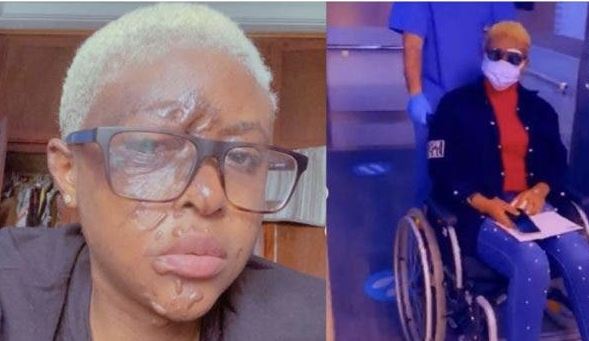 A lady took to Instagram to recount how a neighbour who was jealous of her created a fake account, tarnished her name and then offered money to people to pour acid on her.

The acid attack has left indelible scars on her body which continues to remind her of her past experiences.

According to her, her attackers were paid F250,000 with an advance payment of 50,000f to pour to carry out their deadly attack.

Read Her Story Below;

It’s been a whole year already since tragedy hit me.I haven’t posted this officially on my page becuz I needed to heal physically and mentally,I wanted my soul to heal before officially speaking on this and I think now is the time.

Last year on the 2nd of May(my birth month)a guy name Eventis Shu Nji and his baby mama Elangwe Nora Mesumbe paid two guys TABE Jones and his friend Carlos to pour acid on me,they offered the two 250,000f which an advance payment of 50,000f was done first and the remaining money was to be paid after the job was done.

All this started two years ago when Nora contacted me as a client who wanted to buy some products I sell,I directed her my shop and she bought her stuff and left,the time she spent in my shop she tried so hard to bring up some other topics far from business which I avoided, the next day she texted me again sayx she just noticed we were neighbors and that it was a gud oportunity for us to be best of friends and how she wanted to come visit me in my apartment, I wasn’t comfortable with that so I told her I wasn’t around.long story short,she tried so hard to get close but I made sure it was business and nothing else.

That was when I now got the conformation from her friends that she was the person with that account,many of them contacted me and told me they knew the person who has the account and were asking me if I knew Nora becuz she had told them that her boyfriends ex was using the account to threaten her life but when investigations were done they discovered she was the one…”