Operatives of the EFCC have apprehended a notorious internet fraudster, Ugochukwu Simeon. 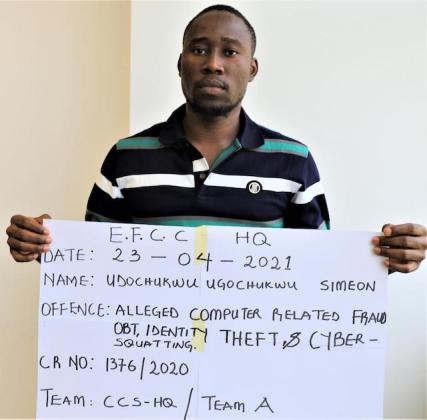 Ugochukwu Simeon
Udochukwu Ugochukwu Simeon, a suspected internet fraudster has been apprehended by the Economic and Financial Crimes Commission.
He was arrested for creating fake e-mail addresses of the agency and used same to defraud unsuspecting victims.
The 26-year-old suspect created an Outlook email account of the Commission, “[email protected]” and a webmail, [email protected] which he used to impersonate the EFCC.
Investigation by the Cybercrimes Unit at the Commission’s headquarters, Abuja indicates that the suspect also uses the two fake e-mail accounts to send messages to his victims.
While doing so, he posed as an officer of the Commission, trying to help the victims recover their stolen monies.
Before his arrest on 21 April, the suspect had received over $3,000 from some of his victims.
Ugochukwu’s activities amount to forgery, identity theft, impersonation and cybersquatting, said EFCC spokesman, Wilson Uwujaren.
He will be charged to court upon the completion of the investigation, Uwujaren said on Wednesday.
Top Stories