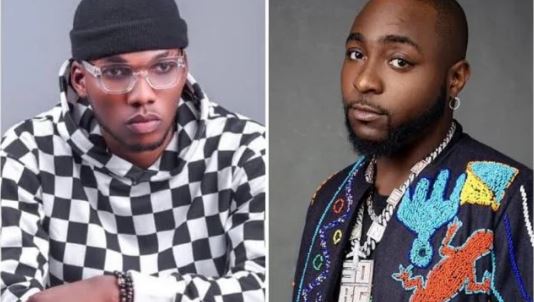 Victor AD and Davido
Singer, Victor AD has denied rumours that Davido stole his song.
Recall that a Twitter user had accused Davido of stealing Jowo from Victor AD.
The tweet read, “Victor AD just confirmed Davido stole his record ‘Jowo’. According to him, OBO heard d song after they recorded ‘Tire You’. He was surprised to see d song on ABT without him/his mgt consent. He said Davido blocked him on Socials & threatened to ruin him. This wickedness.”(sic)
Shortly after the tweet was posted, a debate sparked on social media and people took to their accounts to air their opinion.
A Twitter user, Tsmith, via the handle @Timmyblinkx, tweeted, “I said it, why is Davido using people’s glory to shine, any of his hit songs are always written by someone. Make Davido just rest abeg. Quit; there is no shame in that.”(sic)
Aligning with Tsmith’s opinion, Mami Nelowie, with her handle @Afroladies_ , wrote,” Himself sabi no talent there, E rise on others talents. See what Tekno became after associating with him. E is using ppl & all the glory is 4him.”(sic)
Putting an end to the rumour, Victor AD denied the claims via his Twitter handle. The singer wrote, “Omo, no be me write JOWO for @davido. I don’t know where all this is coming from. Make una let baba celebrate him 10yrs in peace #olofofo.”(sic)
This speculation is making rounds the same week Davido is celebrating his decade-long career.
Accolades and congratulatory messages have been pouring in from the multiple award-winning singer’s fans while only a select few of his colleagues in the entertainment industry congratulated him.
Noting this disparity, a Twitter user wrote, “Most praises Davido got for his 10 years anniversary came from his fans… his colleagues out there acting all blind and shii”(sic)
Agreeing with the tweet, Davido tweeted in affirmation, “Nah today? Lol.” (sic)

Omo no be me write JOWO for @davido I don’t know where all this is coming from. make una let baba celebrate him 10yrs in peace #olofofo