It was gathered that the hoodlums killed a police officer and vandalized Senator Godswill Akpabio Unity Hall in Essien Udim Local Government Area of the State. 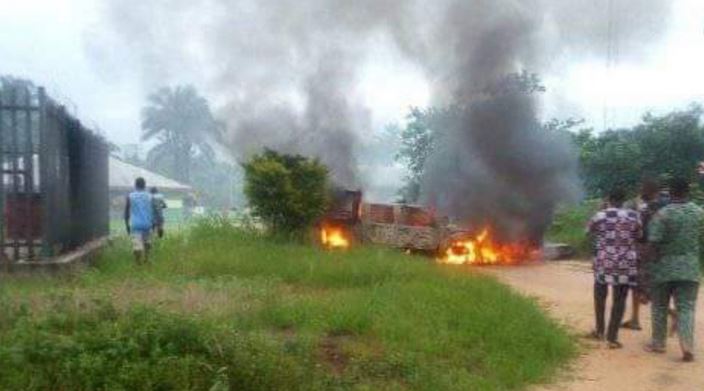 There was palpable tension as armed men in the early hours of Wednesday invaded the Police Area Command and Division in Etim Ekpo Local Government Area of Akwa Ibom State, killed one officer, and razed parts of the stations.

The officer killed has been identified as Police Constable, Edogi Bassey.

It was gathered that the hoodlums vandalized Senator Godswill Akpabio Unity Hall in Essien Udim Local Government Area of the State.

A resident of Essien Udim who did not want his name in print told DAILY POST that, “the hoodlums invaded Godswill Akpabio Unity hall today(Wednesday) broke the louvres, the ceilings as well as the plastic chairs inside the hall.”

The source said that the reason for the destruction of properties in the hall and the vandalization of the building could not be ascertained adding that no life was lost in the Essien Udim attack.

Meanwhile, the Police Public Relations Officer, SP Odiko Macdon in a press statement issued after the incidents said the armed men in their numbers launched an attack on the police division and area command at about 6:30am.

He said the police officers on duty repelled the attack but unfortunately, one PC Edogi Bassey was shot dead in the battle adding that the gunmen who proceeded to Ika division to unleash mayhem were also repelled.

The statement in parts, “Armed Men, in their numbers, armed with AK 47 rifles and other dangerous weapons, in two vehicles attacked the rented building housing the Etim Ekpo Area Command and Division.

“The undaunted and vigilant Police Officers on duty gallantly fought back, repelled them and averted the intended carnage. Unfortunately, a dedicated Officer, one PC Edogi Bassey paid the supreme price while a small portion of the building was touched.

“The gunmen who proceeded to Ika Division to perpetuate their nefarious activities were successfully repelled again, leaving the station intact without loss of lives or arms.

“The Commissioner of Police, CP AMIENGHEME ANDREW who is going round formations and Divisions to ensure alertness and safety of Officers, Men and the People has called on law-abiding Citizens to volunteer timely information that will enable the Police tackle the present security challenges.”