A Nigerian woman has been left emotional after she got a whopping N1 million as birthday gift. 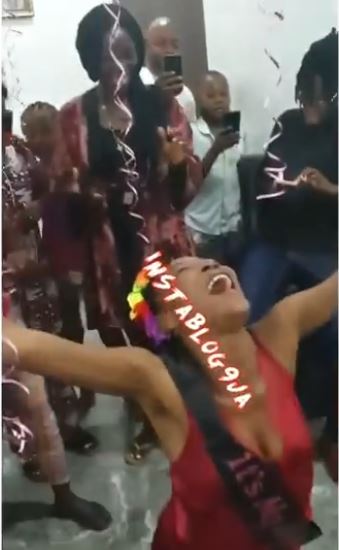 Girl excited after getting N1 million birthday gift from brothers
A lady couldn't hide her happiness after her brothers gave her a surprise N1 million as birthday gift.
A video of the footage capturing the moment she shouted in jubilation after she was given the gift by her brothers has made the rounds on social media.
The lady in the video gradually opened the box sent to her only for her to see the stash of cash duly wrapped inside, this prompted her to scream uncontrollably while rolling on the floor as she found no better way to express her joy.
The gift was accompanied by a little write-up penned in the box, which read:
“With Love Your Brothers”
The lady could also be heard saying that she was broke and itching so close to lack before the valuable gift arrived.
Watch the video below:

Lady in raptures after her brother surprised her with N1m cash on her birthday pic.twitter.com/o6IuSESUeh