The proposal has triggered varying reactions as netizens claim that it is absolutely wrong for the pregnant woman to propose to her man. 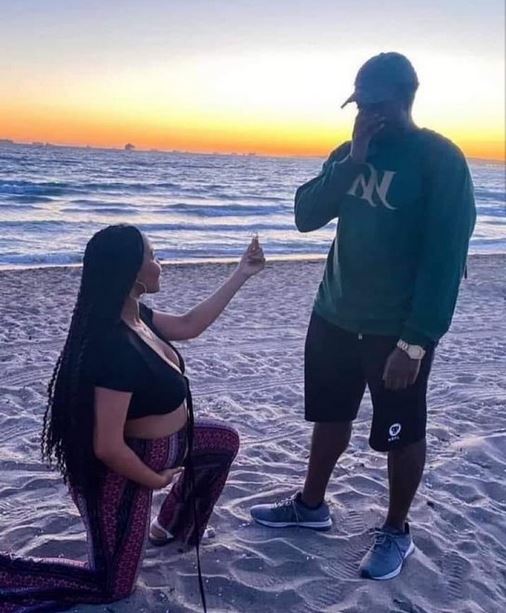 There are mixed reactions after a photo went viral showing a pregnant lady kneeling to propose to her boyfriend on a beach.

The photo went viral after a Twitter user with handle @MagnumJackson shared it online.

In the photo, the woman went down on one knee and presented the engagement ring to her man who acted surprised.

The Twitter user described the proposal as beautiful and added that it shows that men are the “prize”.

This is beautiful. Fellas remember… WE are the prize! pic.twitter.com/DRrSiYdk5Y

However, the proposal has triggered varying reactions as netizens claim that it is absolutely wrong for the pregnant woman to propose marriage to her man.

“not being funny, but I’d kinda like to know what’s the real issue here? she loves him and wants to marry him. how is that bad?”

@SWareiMSmooVe;
“He covering his mouth because he realized he failed her as a man and let his pregnant woman take the knee because he was shook of commiting first that’s what I see”

@LailahMahara;
“Nope. Ladies don’t do this! Have some pride and self respect!”

@_LOLfuckU;
“I think shaming this woman might be a level of slut shaming.
Let women do what they want.”

@okoya_;
“i’d have that baby upside down before i propose to a nigga”

@kammalita;
“While holding a BABY bump? Lord please don’t let me ever be down this bad”