Eye witnesses’ account said an officer of the Nigerian Air Force, was allegedly murdered by the hoodlums last Tuesday. 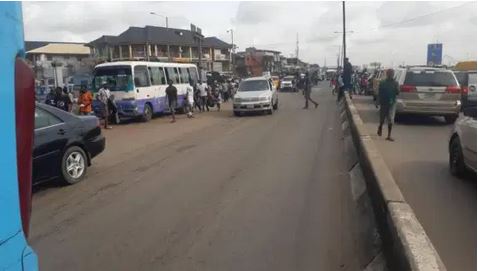 According to a Vanguard report, serious pandemonium took over the Capa Park Mosafejo area of Oshodi, Lagos State, on Thursday.

This was after a group of Military men stormed the area to comb the hideouts over the murder of their colleague by some miscreants in the area.

The incident which occurred in the morning led to many residents, traders, and road users being stranded for fear of the unknown as the Military men took over the entire area while trying to fish out the miscreants.

It was gathered that some suspected hoodlums were picked in the process of combing the hideouts while some dangerous weapons were recovered.

Eye witnesses’ account said an officer of the Nigerian Air Force, was allegedly murdered by the hoodlums last Tuesday.

Vanguard gathered that the deceased who was on mufti allegedly ran into the hoodlums who were obtaining innocent victims at that time, unfortunately they swooped on him.

However, this was resisted which led to his death under a tragic circumstance.

A hawker simply identified as Madam Soozy said in an attempt to resist the hoodlums, the Air force personnel was overpowered and killed.

She said, “they took their time to search him and found his means of identification in the process. They tied his hands and lynched him after which they dumped his remains into a ditch,” said a hawker.

It was gathered that the information about the evil deed got to the know and that spurred the Military into action on Thursday.

In the process of rampaging, the hoodlums took up the opportunity and started vandalising and looting properties especially commercial vehicles within the vicinity.

However, the hoodlums were overpowered and the situation was put under control.

As at the time of filing this report, relative calm has returned to the scene as a combined team of Military and Para-Military were on ground.

The number of arrests could not be ascertained at press time.

Contacted, the Spokesperson of 9 Brigade, Major A.K. Bello, said the Army was not directly involved in the incident, “based on the situation on ground, we had to wade into the crisis and bring the situation under control because of the sensitivity of the environment,”

He said, “The Lagos State Police Command was aware of the conflict that occurred at Capa Park/Mosafejo Osodi Lagos today (Thursday) 20th May, 2021 at 7 am.

“Normalcy has been restored to the area, as the matter is under investigation. We urge Lagosians to go about their lawful businesses in the area and in the state in general.

“No cause for alarm. The Commissioner of Police, Lagos State, CP Hakeem Odumosu, has ordered that intensive patrol be emplaced in the area,” he added.