The deadly fight between Israel and Palestine has come to an end after 11 days. 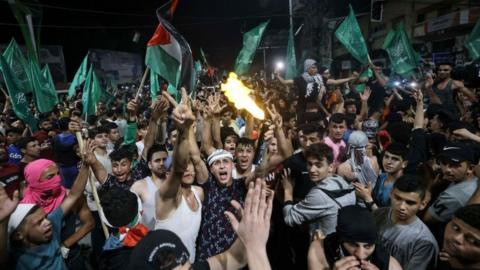 Jubilation as Israel and Palestine reach ceasefire agreement
There was jubilation on Friday after Israel and the Palestinian militant group Hamas reached a ceasefire agreement.
The two had been engaged in a deadly fighting that lasted 11 days.
The ceasefire was brokered by a coalition of US, Egypt, Jordan, UAE and the UN meeting with the Israeli and Palestinian government. The ceasefire began on Friday May 21, bringing an end  to 11 days of fighting in which more than 240 people were killed, most of them Palestinians in Gaza.
Both Israel and Hamas have claimed victory in the conflict.
US President Joe Biden reacting to the truce said the ceasefire brought "genuine opportunity" for progress.
Soon after the ceasefire started at 02:00 on Friday (23:00 GMT on Thursday), large numbers of Palestinians took to the streets in cars and on foot to celebrate.
In Gaza, drivers honked their horns, while loudspeakers from mosques pronounced "the victory of the resistance".
The fighting began on 10 May after weeks of rising Israeli-Palestinian tension in occupied East Jerusalem that culminated in clashes at a holy site revered by both Muslims and Jews.
Hamas then began firing thousands of rockets into Israel after warning Israel to withdraw from the site most of which were intercepted or fell into Palestine territory.
Israel responded with devastating  retaliatory air strikes and at least 232 people, including more than 100 women and children, in Gaza, according to its health ministry.
Israel has said at least 150 militants were among those killed in Gaza. Hamas has not given casualty figures for fighters.
In Israel 12 people, including two children, were killed, its medical service says.
The Israeli military says more than 4,300 rockets were fired towards its territory by militants and that it struck more than 1,000 militant targets in Gaza.
The Israeli Political Security Cabinet said on Thursday night that it had "unanimously accepted the recommendation" for a ceasefire.
"The political leaders emphasised that the reality on the ground will determine the future of the campaign," the statement said.
An Israeli official told ministers that Hamas was "deterred and suffered serious blows", according to the Ynet news website while the
Israeli Defence Minister Benny Gantz said on Twitter that the Gaza offensive had yielded "unprecedented military gains".
While a Hamas official told the Associated Press news agency that the ceasefire announced by Israel amounted to a "victory" for the Palestinian people and a defeat for Israeli Prime Minister Benjamin Netanyahu.
Top Stories