The victims, who were mostly traders, were said to be heading for a market in Kebbi State when tragedy struck. 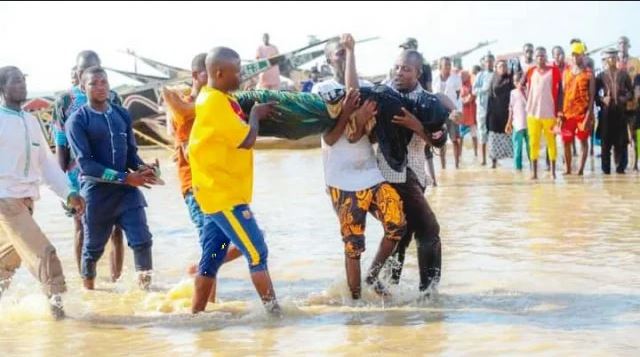 One of the victims being taken away

No less than forty-eight dead bodies of the people involved in a boat accident in the Ngaski Local Government Area of Kebbi State have been recovered, according to The PUNCH.

This was stated by the Chief Press Secretary to Governor Atiku Bagudu of Kebbi State, Alhaji Abubakar Muazu, during a telephone interview with PUNCH Metro on Thursday.

Muazu said, “So far, a combined team of rescue operatives have discovered 48 dead bodies and the search for the other casualties is ongoing around the river where the incident took place.”

According to him, officials of the National Emergency Management Agency and other stakeholders are currently trying to locate the remaining bodies.

He, however, ruled out the possibility of getting any of the victims alive.

The boat, which was conveying over 180 passengers, took off from Loko in Minna, Niger State, and was heading for Kebbi State when it capsized.

The victims, mostly traders, were said to be heading for a market in Kebbi State when tragedy struck.

The Executive Director of the Kebbi State Emergency Management Agency, Alhaji Abbas Jamba, said, “The recovery is a continuous process and I cannot say when it will end going by the presumed number of people on board.”

The Special Adviser on Media to the Governor, Yahaya Sarki, in a terse statement, said, “Kebbi State is in deep shock and sorrow over the unfortunate boat accident which claimed the lives of a lot of passengers after it capsized on Wednesday, in the Ngaski Local Government Area of the state.

“The state Governor, Senator Abubakar Atiku Bagudu, condoles with the families of those affected by the unfortunate boat accident and prayed the Almighty Allah to give the families the forbearance to bear the loss in good faith.”

Bello, in a condolence message, sympathised with the families and close associates of those who died, urging them to accept it as an act of God.

He also prayed for the quick recovery of the injured and traumatised victims.

The Attorney-General of the Federation and Minister of Justice, Abubakar Malami, also commiserated with the families of the deceased.

His condolence message was contained in a statement on Thursday by his Special Assistant on Media and Public Relations, Umar Gwandu.

Malami described the incident as unfortunate and prayed for the speedy recovery of those who were rescued.