Hundeyin blasted the victims for praising God rather than seeing their horrific experience as a result of a failing state. 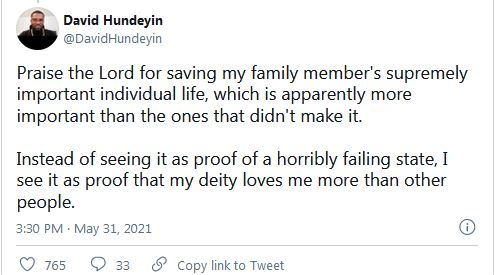 Popular Nigerian journalist, David Hundeyin took to Twitter to lambast newly released abducted students of Greenfield university and their parents for thanking God for their release.

Hundeyin blasted the victims for praising God rather than seeing their horrific experience as a result of a failing state.

According to him, the victims “were busy waving their hands in the air and triumphantly praising their presumably Christian deity.”

He added that he sighed, kissed his teeth and closed the video after seeing the victims praise Christianity deity.

He Tweeted; “Saw a video of one of the Greenfield University abduction survivors being reunited with his folks.

They were busy waving their hands in the air and triumphantly praising their presumably Christian deity. Sighed, kissed my teeth and closed the video. Nigerians will never get it.”

Praise the Lord for saving my family member’s supremely important individual life, which is apparently more important than the ones that didn’t make it.

Instead of seeing it as proof of a horribly failing state, I see it as proof that my deity loves me more than other people.

“I BETTER PASS OTHER PEOPLE” This same mindset finds its way into power, then surprisingly those without power who share the same mindset will start complaining bitterly about how Nigerian leaders are selfish and unconcerned. Linking cause and effect is Astrophysics in this part of the world…

“Every society really does get the exact leadership it deserves. Nigerians deserve Remi Tinubu and Yahaya Bello, regardless of how bitterly we insist otherwise.“ 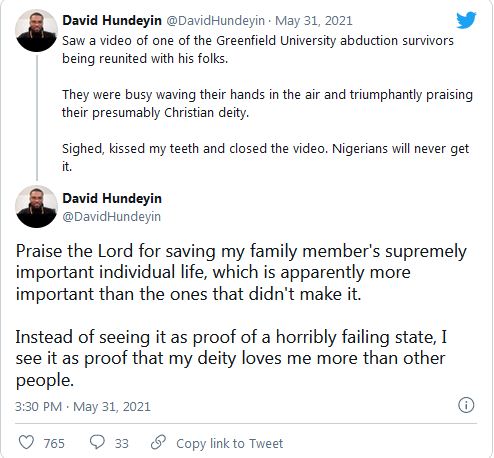