The truck was said to have rammed into the motorcycles before it was halted by the burglar rods of a nearby filing station. 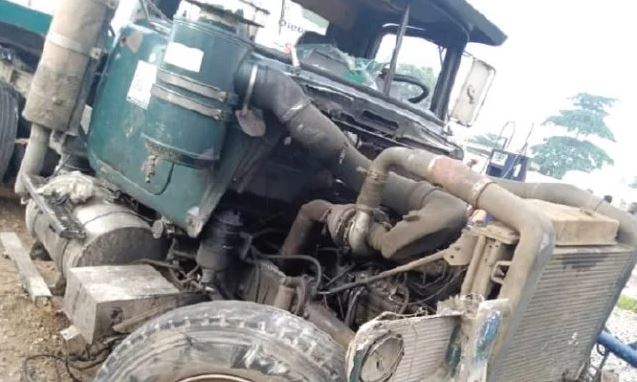 According to a report by The PUNCH, there was tension in the Ikorodu area of Lagos State on Wednesday as eight persons allegedly died in a crash involving a truck which rammed into four motorcycles at the Sheriff bus stop, Ikorodu North Local Council Development Area.

Eyewitnesses told PUNCH Metro that the crash occurred around 10am as the truck that was heading for Odogunyan lost control and swerved to the other side of the road, and faced oncoming traffic.

The truck was said to have rammed into the motorcycles before it was halted by the burglar rods of a nearby filing station.

The remains of the victims were evacuated by officials of the Federal Road Safety Corps at the scene of the accident.

“I think the brakes of the truck failed. I saw eight dead bodies being carried away and the four crushed motorcycles. One of the victims called to inform his family that he was involved in an accident before dying. The FRSC, the police and some soldiers were on the ground,” an eyewitness simply identified as Ben said.

Another eyewitness, who spoke on condition of anonymity, told PUNCH Metro that the truck suffered a burst tyre before it swerved to the other side of the road to face motorists heading for Ikorodu.

“The truck diverted from its lane to the other side. It hit an Acura SUV before colliding with the motorcycles. I saw three motorcycles coming from Odoguyan cleared. I counted seven bodies when the FRSC personnel came to pick up the dead bodies,” the eyewitness stated.

When our correspondent visited the scene, the clothes of some of the victims and shattered glasses were seen on the road.

The accident led to a confrontation between the police and motorcycle riders in the area, which resulted in gridlock.

The police had restored calm to the area as of the time of filing this report.

When contacted, the Ikorodu Unit Commander, FRSC, Olusegun Ogungbemide, confirmed the crash, but said only two persons died, while other injured victims are receiving treatment in hospitals.

“The injured victims were taken to the Ikorodu General Hospital by the FRSC Ikorodu team. Out of the seven victims, two persons died while receiving treatment, and one was amputated,” he said.