The suspects were arrested after dispossessing a filling station manager of N1.5million. 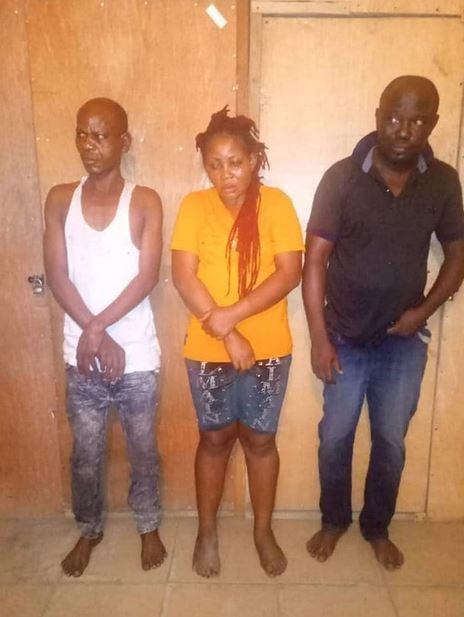 Three members of a one-chance robbery syndicate have been apprehended by operatives of the Rivers State Police Command.

The trio were arrested on Wednesday, June 2, at Rumuosi community in Obio/Akpor Local Government Area of the state after dispossessing a filling station manager, Simeon Ibrahim, of N1.5million.

It was gathered that the victim was on his way to a new generation bank along Rumokoro axis of the council when the robbers who operated as commercial taxi operators trailed and carried him.

While on their way, the female suspect screamed that her hands were hurting and appealed to Ibrahim to assist her in opening the vehicle's door.

While Ibrahim was trying to open the door, they took the money from him and tried to push him out of the vehicle but the victim dragged the steering wheel and raised alarm.

Spokesperson of the command, SP Nnamdi Omoni, who confirmed the incident in a statement said;

"They were nabbed, after successfully robbing one Mr Simon Ibrahim who was on his way to make deposit in the bank, but lured by the gang, who were driving in a Mazda car. However, luck ran out on them when the victim raised alarm that alerted the police and they were immediately arrested and taken to the Choba police station. The victim had in possession the sum of one-million-five-hundred thousand naira (N1,500,000)." Omoni stated.