An overzealous Nigerian soldier has taken to Twitter to threaten anyone who dares to come out on June 12 to protest. 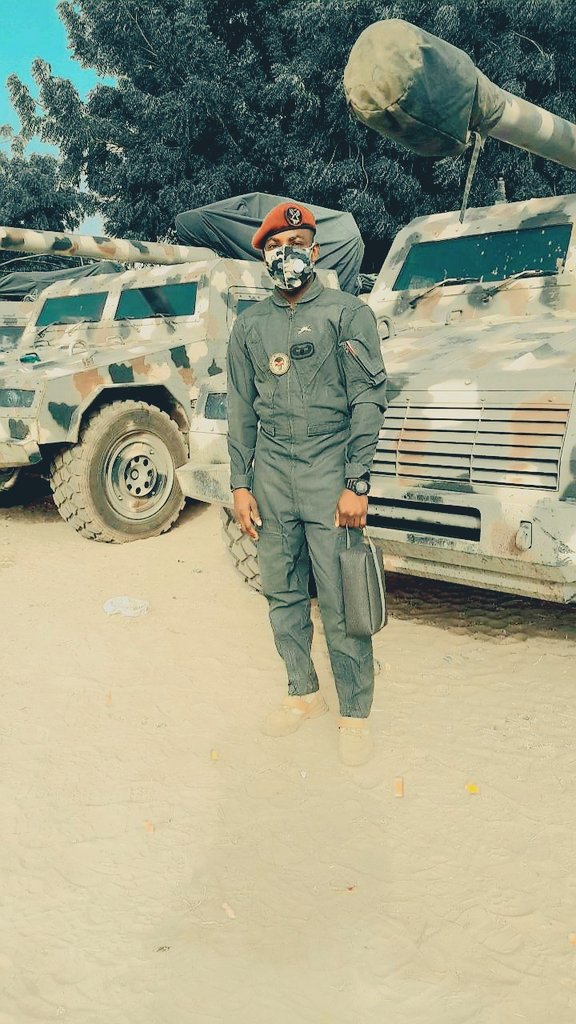 Abbakar
A Nigerian soldier has sent a threat to anyone planning to protest on June 12.
The sodlier identified as Abbakar A. threatened to attack Nigerians planning to hold a protest, according to Sahara Reporters.
This comes as Civil society organisations and human rights activists called for a nationwide protest on June 12, Nigeria’s Democracy Day, against the Muhammadu Buhari-led administration.
According to various publicity posters, the protest will make 14 critical demands which are: abolish 1999 constitution, end terrorism, end banditry, (Isa) Pantami must go (Minister of Communications and Digital Economy who has expressed sympathy for terrorists), free all detained activists, end insecurity, justice for all EndSARS victims, Free Kogi2 (Two anti-President Muhammadu Buhari protesters – Larry Emmanuel and Victor Anene Udoka – who have been detained in Kogi State), Buhari Must Go, revert electricity tariffs, end ASUP (Academic Staff Union of Polytechnics) strike, revert fuel price, revert party deregistration, and free Nicholas Mbah.
“A revolution is possible only when we're ready to do the work. The oppression continues until then...#June12Protest,” a commentator said.
Human rights activist, Omoyele Sowore, still recuperating after being shot by a trigger-happy policewoman during a peaceful protest at the Unity Fountain in Abuja on Monday, also lent his voice to the June 12 protests.
“Good morning, oppressed citizens! We urge you to please join us nationwide/worldwide to engage in massive street action on June 12, 2021. #June12Protest #BuhariMustGo #Revolutionnow,” he said on Tuesday.
“Abolish the 1999 fraudulent constitution imposed on us by the military and give us the people's constitution. #June12Protest,” another commentator said.
“The Nigerian State has declared war on her citizens and we must rise in millions with every resistance available. #June12Protest is an historical duty to save what is left of this country,” another Nigerian said.
Nigeria’s June 12 Democracy Day is a public holiday to commemorate the restoration of democracy in the country.
May 29 was initially the democracy day in Nigeria, until it was changed in 2018 by the Federal Government.
This is special in Nigeria’s history and is used to commemorate the democratic election of Chief MKO Abiola on June 12, 1993, in what has been adjudged to be Nigeria's freest and fairest elections.
It was, however, cancelled by the Ibrahim Babangida military junta, and Abiola was thrown into prison, leading ultimately to his untimely death in 1998.
Reacting to the planned protest, Abbakar in a Twitter post said, “If e sure for them June 12, make dem come out.”
The tweet was however condemned by most of his followers.
“As a member of the NA, aren't you ashamed tweeting this? Making threats to your fellow brothers/sisters for exercising their rights, one you swore to protect? The politicians you're famzing today don't give a ‪$hit‬ about you. May God heal you of your hate sir. Stay safe, “ @TimUnde62585864 said. 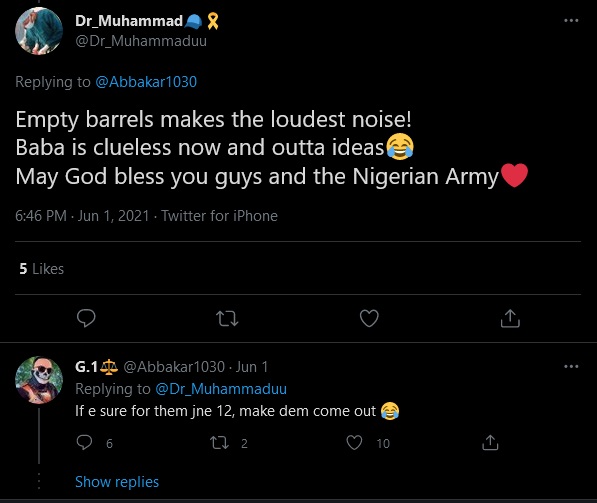