Corruption: How N56 Million Was Budgeted For Classrooms In Akwa Ibom For A School That Doesn't Exist


Already, the project has gulped a whopping N56 million so far with no single classroom block found. 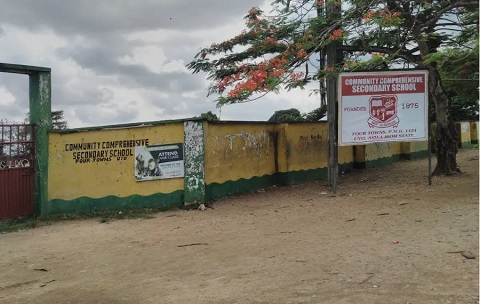 Akwa Ibom school
A report by Premium Times has revealed how a federal lawmaker from Akwa Ibom state budgeted millions for a school that doesn't exist.
Already, the project has gulped a whopping N56 million so far with no single classroom block found.
See report below:
For three consecutive years, Michael Okon Enyong, the lawmaker representing Ibesikpo Asutan/Nsit Arai/Uruan/Uyo Federal Constituency of Akwa Ibom State, nominated the construction of a three-classroom block for a sum of N56 million in a school, which a PREMIUM TIMES investigation has found not to be in existence.
In 2018, N30 million was budgeted for the construction of the phantom classroom block at Community Secondary School, Oku, Uyo. In 2019 and 2020, N13 million was allotted each year for the construction of the block in the same school.
PREMIUM TIMES cannot ascertain if funds budgeted for the project were released and to whom.
The project was originally assigned to the Council of Nigerian Mining Engineers and Geoscience (COMEG). Then in 2019 and 2020, it was assigned to the Federal College of Veterinary and Medical Laboratory technology, in Vom, Plateau State, under the supervision of the Federal Ministry of Mines and Steel Development.
Project not found; school non-existent
A visit by Premium Times to Oku Uyo in Akwa Ibom State, revealed that neither the school nor the block of classrooms exists. Oku is one of the four clans in Uyo Local Government Area and spans 14 villages and residents of the community told this reporter that no school with such a name exists in the area.
“I am from this clan and I grow (sic) up here. I have never seen that kind of name of school in Uyo,” said Akpan Nsikak, a resident.
This reporter visited other government secondary schools in the local government in his quest to locate the school.
“This is Four Towns and not the school you are looking for. I’ve never heard of it. We don’t have any project of that kind here. You can check the school at Ikot Okubo,” Aniedi Essien, principal of Community Comprehensive Secondary School, Four Towns Uyo, told this reporter.
“This place is Offot and not Oku,” a female teacher adds. “The only government secondary school in that Oku is the CCC Girls’ School in Afaha Oku (Cornelia Connelly College), the other ones are primary schools.”
The school, Community Secondary School Oku Uyo, was also missing on the list of government secondary schools in Uyo Local Government Area, provided by the Akwa Ibom State Secondary Education Board.
Govt. Primary School, one of the three primary schools in Oku Uyo Clan. There exists no secondary school
If it was released in full, the N56 million allocated to the phantom school would have gone a long way towards solving Akwa Ibom educational problems.
The state lags behind most states in the country in educational development. A 2019 report by the Federal Ministry of Education, ranked Akwa Ibom as one of the states with the highest out-of-school children with 581,800 children, only behind Kano State.
The report jointly prepared by the Universal Basic Education Commission (UBEC), National Population Commission, and the National Bureau of Statistics (NBS) pegged the total number of out-of-school children in Nigeria at 10,193,918.
List of Govt. secondary schools in Uyo
The construction of the classroom blocks, had it been assigned to a real school, would have supplemented crumbling infrastructure and reduced overcrowding in classrooms, which are common features of public schools in the state, according to a PREMIUM TIMES report.
A 2020 PREMIUM TIMES investigation revealed how constituency projects in Kwara Central were filling the infrastructural gaps in public school education created by poor funding, following the inability of the state government to access the Universal Basic Education Commission (UBEC) funding.
Project outside purview of ‘implementing agencies’
Another curious observation in the allocation of the N56 million was that the project was placed under the supervision of agencies that have zero correlation or proximity to the school.
Situated in Vom, Jos, the Plateau State capital, the Federal College of Veterinary & Medical Laboratory Technology specialises in the training of middle-level manpower in the diagnosis of human and animal diseases, to become medical laboratory scientists, technicians, and assistants.
The Council of Nigerian Mining Engineers and Geoscience (COMEG) is the regulatory body for all professionals in the fields of geosciences, mining engineering, and metallurgy and firms in the extractive in Nigeria. It was established in September 2000.
Both institutions have no direct relationship with Akwa Ibom State nor secondary education.
Both institutions did not reply to requests sent to them for comments about the project such as the amount disbursed and the identities of the contractors the project was allocated to.
More questions as lawmaker reacts
When contacted at the constituency office in Uyo, Anny Michaels, media aide to Mr Enyong, said he was not aware of the project but promised to reach the Senator’s office in Abuja to confirm and revert.
A few days later, Mr Michaels called to say no such project was facilitated by the Senator.
“I got a response from the office in Abuja. They said there is no project like that in Community Secondary School Uyo. I just spoke with the senator’s legislative aide. He has checked and said there is none,” Mr Michaels said.
“In fact, there is no school like that in Uyo. I have also asked a colleague here who is from Uyo and he confirmed that the only schools in Oku are the CCC School and the Primary School Ikot Ntuen Oku.”
Top Stories