Notwithstanding that the late business mogul, Abiola polled a total number of 8,342,309 against Tofa, his arch rival who garnered 5,952,087 votes, the then Military President, General Ibrahim Babangida annulled the results. 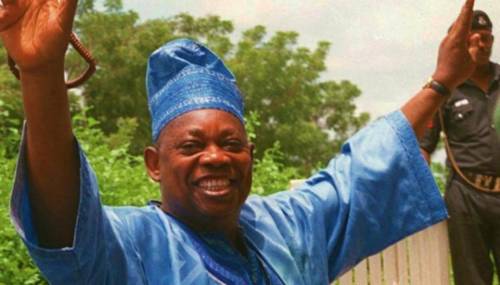 Notwithstanding that the late business mogul, Abiola polled a total number of 8,342,309 against Tofa, his arch rival who garnered 5,952,087 votes, the then Military President, General Ibrahim Babangida annulled the results.

The annulment of the June 12 presidential elections birthed chaos and tension that characterised an autocratic rule and pandemonium in the country for a period of five years from 1993 to 1998. The calamitous state of the nation at that time forced Babangida to hand over power to Chief Ernest Shonekan to head the Interim National Government (ING).

Shonekan only ruled for barely 3 months from 27th August to 17 November, 1993 as his government was halted in a palace coup by late General Sani Abacha, who was regarded arguably the most tyrannical, oppressive and autocratic leader Nigeria has ever had with his military junta.

Abacha arrested and detained MKO Abiola, when the latter declared himself the lawful President of Nigeria at his residence at Epetedo in Lagos on June 11, 1994. He died in detention on July 7, 1998.

2. His parents – Salawu and Suliat were poor as they traded in cocoa and kolanuts respectively, and he too sold firewoods at the age of nine to survive until he grew up with a passionate spirit to succeed

3. He had many wives with the prominent ones known to be late Simbiat, Kudirat, Doyinsola, Modupe and Remi

4. He had many children as well with the likes of the notable ones as Kola, Deji, Lola, Hafsat, Wura and others

5. He hailed from Abeokuta, Ogun State in the South-West region of Nigeria

7. He became the editor of his Secondary School magazine called The Trumpeter as Obasanjo was the deputy editor

8. He joined the political party National Council of Nigeria and the Cameroons established by late Dr Nnamdi Azikwe at the age of 19

9.  He had a degree in Accountancy from the University of Glasgow, Scotland through a scholarship from the Nigerian government

10. He was a Fellow member of the Institute of Chartered Accountant of Nigeria

11.  He was one of Nigeria’s finest business tycoon, philanthropist, politician and publisher

13. He was detained for four years by late Nigeria’s military dictator, Sani Abacha from 1994 to 1998

14. He was a personal friend to the ex-Military leader, Ibrahim Babangida, who annulled his election results

15. He started his professional career as a clerk in 1956 with Barclays Bank in Ibadan, the then old Western region headquarters and the modern Oyo state capital

16. He was actively involved in the formation and activities of the National Sharia Committee in the 1980s

17. He petitioned the United States and other European countries demanding compensations for their enslavement of African people in the 1980s

18. He supported the Southern African Liberation Movements from the 1970s

20. He was once the President of the Nigerian Stock Exchange in the 1980s