As Nigeria celebrated Democracy Day, the protesters stormed major roads in Abuja metropolis to kick against “bad governance” under the Buhari administration. 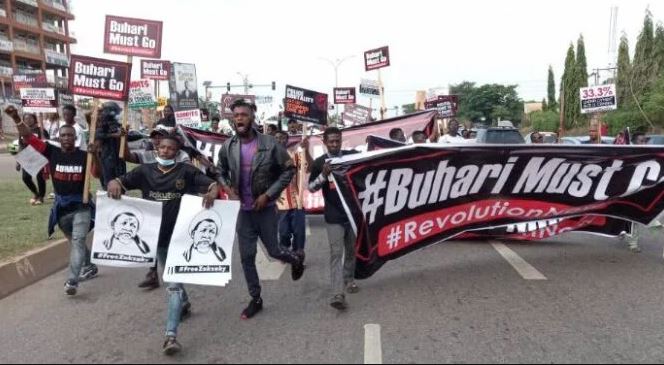 According to TheCable, Shi’ites on Saturday joined June 12 protesters in Abuja to demand the resignation of President Muhammadu Buhari.

As Nigeria celebrated Democracy Day, the protesters stormed major roads in Abuja metropolis to kick against “bad governance” under the Buhari administration.

They chanted songs and held placards with inscriptions such as, ‘Buhari must go’, ‘Police brutality has not stopped’, ‘Digital right is a human right’.

But among them were also members of the Islamic Movement of Nigeria (IMN) better known as Shi’ites, who have been protesting the continued detention of Ibrahim El-Zakzaky, IMN leader.

“Buhari must go… free El-Zakzaky… stop injustice,” the protesters chanted as they marched along the streets.

There are fears that the protest could turn violent considering how the police have responded to similar demonstrations in the past.

The police had earlier fired teargas at some Democracy Day protesters in Abuja after they (the protesters) resisted attempts to disperse them.

Past protests by the IMN members in the past have often ended up in violence, with incidents of deaths and injuries recorded.

They have been protesting the detention of El-Zakzaky who has been in custody since December 2015 after an incident involving the Shi’ites and soldiers of the Nigerian army in Kaduna state.

Hundreds of the IMN members were reportedly killed by the soldiers when both parties clashed in Zaria.

El-Zakzaky and Zeenat, his wife, are standing trial over the incident on an eight-count charge bordering on alleged culpable homicide, unlawful assembly and disruption of public peace.