Governor Ganduje said him stepping on Kwankwaso's picture was unintentional. 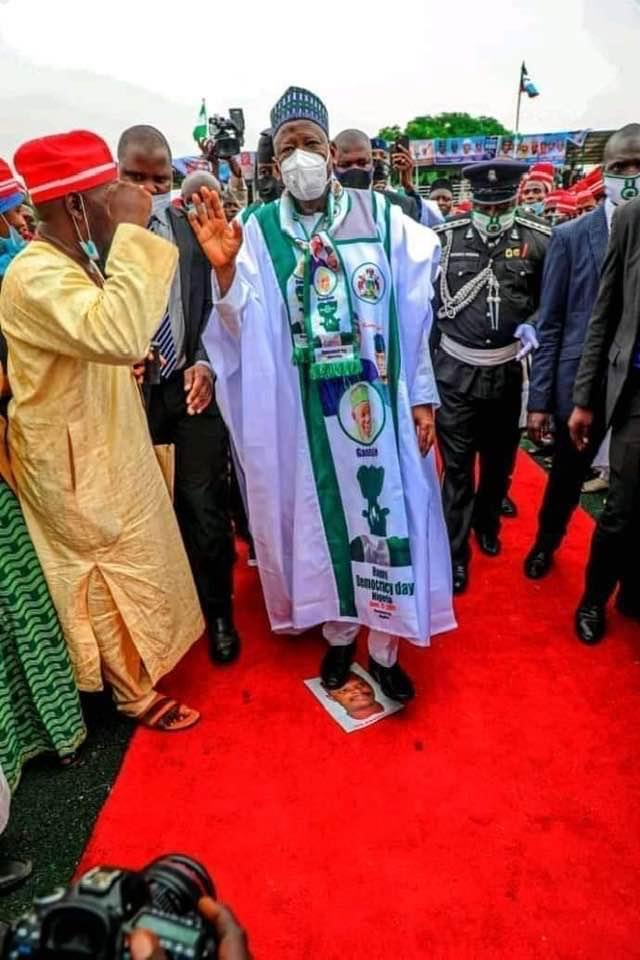 Ganduje steps on Rabiu Musa Kwankwaso's picture during rally
Governor Abdullahi Umar Ganduje has reacted after Nigerians blasted him for stepping on a picture of his political opponent, Rabiu Musa Kwankwaso during an event on Saturday.
The incident happened in Kano during a political mega rally.
Reacting through the Kano State Commissioner for Information, Malam Muhammad Garba, Ganduje who spoke on Monday said he will never belittle anyone irrespective of their political differences.
Giving an account of what actually happened, he said:
“during the events, which was organized as part of activities marking this year’s Democracy Day, two former gubernatorial candidates and many members of the Kwankwasiyya defected to the APC.
“When Governor Ganduje was called to the podium, the former Kwankwasiyya members lined up on the way to applaud and pay their allegiance to the governor.
“Some of the members who abandoned the Kwankwasiyya movement at the event, parenthetically, were downplaying pictures of the former governor, one of which, dropped on the red carpet as Governor Ganduje walked his way to the podium, and unknowingly stepped on it”.
The commissioner further emphasized that Ganduje is known by many as peace-loving, tolerant, and harbors no grudges to influence such an act.
Top Stories