Storming the secretariat with the corpses of the victims and those injured in the clash, our correspondent gathered that the governor's aides quickly arranged for him to escape. 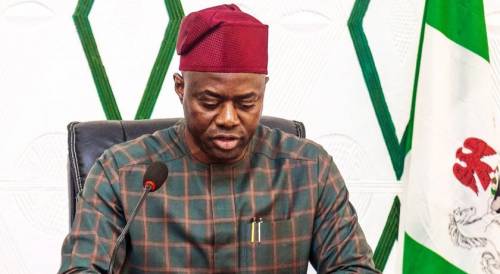 Many angry youths on Wednesday stormed the office of the governor of Oyo State, Seyi Makinde to protest the gruesome murder of two of their friends by members of the National Road Transport Workers (NURTW), otherwise known as Motor Park System (PMS), SaharaReporters reports.

Storming the secretariat with the corpses of the victims and those injured in the clash, our correspondent gathered that the governor's aides quickly arranged for him to escape.

SaharaReporters on Wednesday reported that members of NURTW clashed in the Iwo Road area of Ibadan and left two people dead.

SaharaReporters reliably gathered that the governor was still in his office around 5:48 pm when the angry youths arrived at the secretariat but he hurriedly exited through the fire service gate to avoid talking to the youths.

"NURTW was silenced by Isiaka Ajimobi's administration during his eight years in office. Did you hear they were on a rampage for eight years? No. I don't know why Makinde is empowering this thug called Auxiliary. Did you see the video in which Auxiliary was threatening to kill the former governor of Ekiti state, Ayo Fayose? Is that a good man? Makinde could have followed some policies of Ajimobi, especially in the area of security to maintain peace in the state," he said.

Our correspondent reports that the Chairman of Park Manager System (PMS), Mukaila Lamidi, popularly called Auxiliary has been identified as being behind many clashes in the state.