Drama As Two Women Find Out They Are Dating The Same Man...You Won't What They Did To Punish Him


Kristen Bishop, 33, and Sophie Miller, 26, were shocked to discover they were both in a relationship with 'Adam' (not his real name) for eight months. 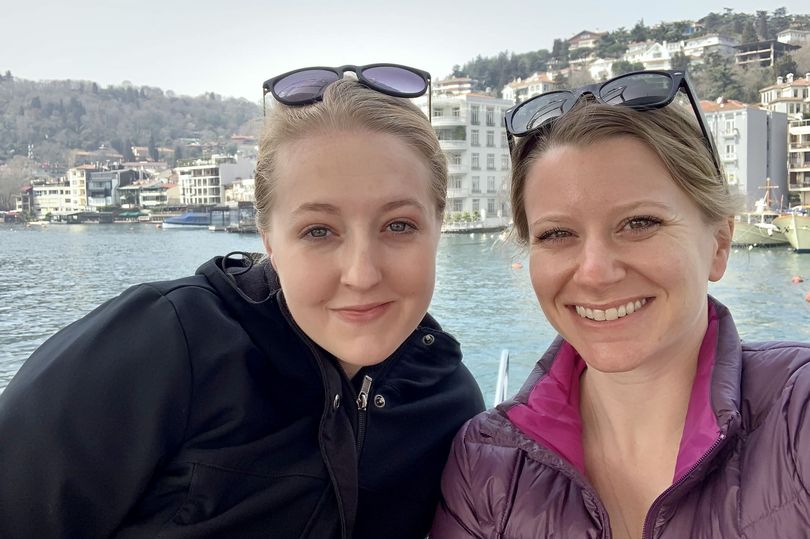 Kristen Bishop, 33, and Sophie Miller, 26, two women who found out they were dating the same man got the ultimate revenge by dumping him at the airport to go on holiday together.

They were shocked to discover they were both in a relationship with 'Adam' (not his real name) for eight months.

Kristen revealed she first found out about Adam's infidelity when Sophie contacted her to spill the beans.

She initially refused to believe the account - until Sophie video called her Adam's home to prove she wasn't lying, LadBible reports.

To even the score, the scorned strangers hatched a plan to get the 34-year-old love rat back.

Kristen and Adam had planned an eight-day trip to Istanbul in Turkey, but when they landed she told him she knew about his affair with Sophie.

She then ditched her "pretty stunned" partner at the airport to enjoy a "phenomenal" holiday with Sophie instead.

"I found out about him cheating about four days prior to the trip," Kristen, an engineer from Houston, Texas, said.

"[Sophie and I] honestly had a phenomenal time. From the moment we met, we instantly connected, over an unfortunate circumstance.

"We became friends quite quickly after we met up. We had lots of time to get to know each other and develop the friendship that came out of it.

"We really bonded over the eight day trip and it's by far the happiest thing out of this unfortunate situation, that I found a great friend."

She added: "A girls' trip is infinitely better than trying to travel alone to a foreign country.

"As soon as she offered to join me, I was 100 percent on board. I said 'this is the start of something great. Let's do it'."

Kristen met Adam on dating site Hinge last year. After casually dating for several weeks, the couple agreed to become an item and booked a holiday to Turkey.

But just four days before they were about to fly, Sophie called Kristen to admit she was also seeing the same man.

"She left me a short voicemail, to the point, that basically said 'Hey, I've just learned about you. I've been dating this person for nine months and I thought you'd like to know about me. Give me a call if you have any questions'," Kristen said.

"After the initial shock, I gave her a call and we chatted for a bit.

"It was clear very quickly that she was telling the truth and we needed to talk some more to get to the bottom of what was happening.

"He met her on the same dating app about one month before he contacted me. He reached out to both of us initially on the app."

In the days that followed, the woman agreed that Sophie would also fly to Istanbul so they could confront the cheat at the airport.

Once there, Kristen told Adam his hotel reservation had been changed to her name and demanded him never to contact her again.

"I told him not to contact me again or follow me out of the airport. At which point I turned around, waved over to Sophie and she walked up," she said.

"His jaw dropped when he saw her. She reiterated my message, we turned around and walked away together.

"There was not much commentary on his part. He had already attempted to paint her in a negative light prior to that.

"He had tried to say they'd been broken up. I knew that wasn't truthful. There wasn't much opportunity for him to respond."

Kristen added: "He ended up being on our flight home. Other than that, we have not heard from him.

"There was a very short-lived attempt to mention something, but we weren't interested.

"We were actually sitting behind him on the flight back. That's a 13-hour flight.

"We just sat there chatting, giggling and enjoying the flight, and he heard every word."