The food supplier was arrested by soldiers at a market in Borno state. 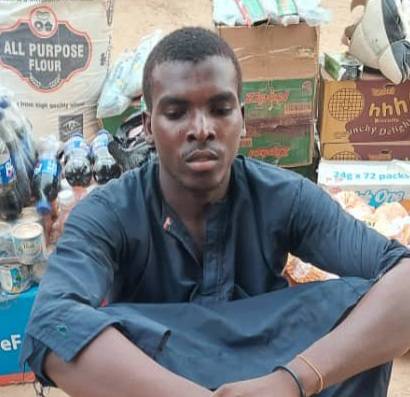 Kachalla
A trader who supplies food to notorious terrorist groups, Islamic State West African Province and the Boko Haram has been nabbed.
He was arrested at a market in Borno State.
According to PRNigeria, the suspect, Wida Kachalla, was arrested in Benisheikh Market by troops of the 154 Taskforce Battalion in conjunction with local vigilantes.
It was learnt that Kachalla was also an “errand boy” for the notorious ISWAP Logistics Commander, Modu Sulum, who was killed on Sunday by troops of Operation Hadin Kai.
Kachalla is a native of Murguba Settlement, an area firmly under ISWAP, Boko Haram control.
An intelligence operative revealed that at the point of arrest, Kachalla succeeded in chewing his SIM cards, but his two mobile phones were recovered by the troops.
“In recent weeks, we have intercepted communication and couriers of terrorists in their various channels and routes. While the suspect chewed and swallowed his SIM cards, we already got the major data for intelligence gathering.
“Other items recovered from him included a bag of flour, cartons of biscuits, crates of evaporated milk, crates of soft drinks, cartons of anti-grass chemical, among other consumables,” the operative stated.
SaharaReporters had on Monday reported that the land and air components of the Nigerian military conducted strikes on ISWAP and Boko Haram location in Wartek in the general area of Lamboa forest in Borno State.
SaharaReporters had learnt that an ISWAP commander, Modu Sulum, as well as 20 other fighters, were killed in airstrikes on Sunday.
The ISWAP fighters were reportedly part of the network responsible for the killing of evasive Boko Haram leader, Abubakar Shekau as well as the destructions of power transmission towers at Malanari along Maiduguri-Damaturu Highway.
They were taken out in airstrikes conducted by Alpha-Jets, L-39, and MI-35 helicopters.
The Director, Army Public Relations, Brig-Gen Onyema Nwachukwu, had confirmed in a release that the terrorists were killed in land and air offensives.
Top Stories