The state's head of service, Hakeem Muri-Okunola, made this claim on Tuesday when he appeared before the Lagos judicial panel on police brutality to represent the state government. 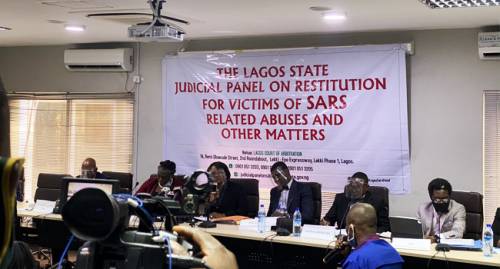 According to SaharaReporters, the Lagos state government has claimed that most of the injuries sustained by #EndSARS protesters at the Lekki tollgate were from machete cuts and stampede.

The state's head of service, Hakeem Muri-Okunola, made this claim on Tuesday when he appeared before the Lagos judicial panel on police brutality to represent the state government.

Muri-Okunola presented before the panel, a timeline of the activities of the Lagos state government during the #EndSARS protests, including the Lekki tollgate shooting, The Cable reports.

According to him, the state government established an ad hoc committee, referred to as the incident command centre, during the protests to monitor the security situation in Lagos.

He stated that when Governor Babajide Sanwo-Olu visited Reddington Hospital and General Hospital, Marina, on October 21, 2020, it was discovered that 25 patients were receiving treatment in the two hospitals.

The head of service was quoted as saying, “Due to the monitoring activities of the incident command centre, we were informed that there were indeed casualties in some of our hospitals in Lagos. There were more than other places — based on our feedback and information monitoring — in Reddington hospital on Admiralty way, and in General hospital, Marina.

“Getting to about 10:30 pm (on October 20, 2020), the governor then decided that we should go out to see what was going on for ourselves — a decision that his core security personnel rejected outrightly as unsafe.

“At about 12:30 am, 21st October — we have crossed to midnight now — because of the number of people that were reported to have been in Reddington hospital, the governor, against the said security advice, decided to visit and see what was going on at the toll plaza, the Reddington hospital and General hospital, Lagos.

“In this Reddington hospital, these individuals were injured in that axis. Some of them alluded to being injured in a stampede of running, falling over each other.

“Predominantly, there were about 13 people injured in Reddington hospital Admiralty way. The General Hospital also had 12 patients. The doctors in charge said there was one of those patients that were being moved to LASUTH, who had more severe injuries from machete wounds.

“At the time we were there, most of the injuries were all in the nature of cuts, bruises from machete wounds and stampede. Nobody at the hospitals said they were shot at.”

He also echoed Sanwo-Olu's claim that only two persons died as a result of the incident at Lekki tollgate.

“The Lagos state governor confirmed two deaths — one of which was said to have died at Reddington hospital on Admiralty way, who died as a result of blunt force trauma, and the other at Yaba. The governor stated that there was going to be an investigation to confirm the nexus of the death in the incident of Lekki,” he added.

Muri-Okunola also insisted that social media played a major role during the #EndSARS protests, stating that online activities contributed to the “wanton destruction” that occurred during the demonstrations.

“The incitement of this misinformation played a major role in the mayhem, wanton destruction and loss of lives that followed the Lekki incident throughout Lagos state, costing taxpayers losses that may take years and billions of naira to mitigate.

“There has been controversy about the actual number of alleged deaths at the Lekki toll incident. However, since 22 October 2020, many of the people reported to have been killed issued denunciation of their rumoured deaths.”

During cross-examination, Adesina Ogunlana, counsel for #EndSARS protesters, asked the head of service about the identity of those involved in the shooting at Lekki tollgate.

“Can you confirm that men from Bonny camp were at the scene?” Ogunlana asked.

“That is what I heard. Based on the information that we heard, military men from Bonny camp were there,” Muri-Okunola responded.

At the hearing, the head of service presented a document detailing the private and public properties destroyed during the #EndSARS protests.

The case was adjourned till June 29, 2021, to enable Olumide Fusika, another counsel to #EndSARS protesters, to cross-examine the head of service.