Kayode was lambasted by the activist after he praised Governor Yahaya Bello of Kogi state. 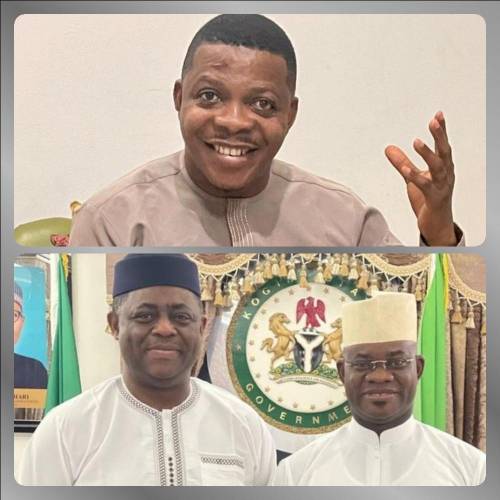 Activist attacks FFK
A Nigerian activist, Usman Austin Okai has called out Femi Fani-Kayode.
Kayode was lambasted by the activist after he praised Governor Yahaya Bello of Kogi state.
This comes as Fani-Kayode took to his Twitter handle to shower praises on the Kogi State Governor, whom he met during the weekend.
Fani-Kayode, in his tweet, expressed optimism that amid the current crisis bedevilling the nation, “Nigerians will have every reason to smile again”.
The tweet reads, “I had a fruitful and productive meeting about the way forward for our country, crucial national issues, security matters, and politics with Governor Yahaya Bello before leaving for Abuja. Much will unfold in the politics of this country in the coming days, weeks, and months and Nigerians will have every reason to smile again.
“We shall surely prevail and God will guide, lead and protect our people and our country and grant us peace. I had a wonderful time in Kogi and I met wonderful people.
“Thanks be to God and my love and appreciation go to the Governor and his team for hosting my delegation of 15 and me so well.”
But in a statement on Wednesday, Okai advised the former minister to rise above his stomach and pecuniary gains by desisting from insulting the sensibility of Kogi indigenes with the unmerited praises showered on Bello.
The statement reads: "I have observed with great dismay the complimentary remarks and comments showered on the infamous Governor of Kogi State, Yahaya Bello, by a former minister, Chief Fani Kayode.
“Until recently, Chief Fani Kayode used to be a man I held in high esteem but, he is gradually tilting towards the path of infamy.
“I expected that being a man who has served at the highest level of government- the Federal Executive Council, Fani Kayode should be able to differentiate between good governance from clownishness but I was wrong.
“For some days now, FFK has been using every opportunity and platform that he has to insult the sensibility of Kogi indigenes and residents alike- who have been at the receiving end of Bello's evil and maladministration by labelling a man who has been judged by the majority of people in the population of the state and Nigeria at large as a failure per excellence.
“The same Yahaya Bello who is infamously known as a disgrace to youths and governance is the man Chief Kayode coronated with the robe of champion of Nigerian youths.

“It is unfortunate that since 2015, FFK has fallen from the exalted office of Campaign Spokesman for President Goodluck Jonathan to the clownish state of instability and riff-raffism.
"His notorious instability has seen him become a champion of Biafra secession whenever he is with Nnamdi Kanu, a champion of Oduduwa Republic secession whenever he's with Sunday Igboho; and at the same time an advocate of one united Nigeria whenever he is with Yahaya Bello or any Nigerian Governor. Which mentally stable human being will be an advocate of secession and at the same time an advocate of united Nigeria?
"While I am not against the decision of Chief Kayode to take advantage of the wastefulness of Governor Bello, he would have done himself good by quietly taking his share and hiding his head in shame instead of dancing naked in the market square.
"It will be in the interest of Chief Fani-Kayode to respect himself as a former minister and rise above the dictates of his stomach. He can't be a critic of the failed Buhari administration but and at the same time praise Yahaya Bello - who in relative terms is failure personified.
"Kogi state indigenes will not fold their arms and watch anyone insult their sensibility by making them look stupid simply because such a person craves to fulfil the ambition of his stomach."
Top Stories