In a bid to defeat unknown gunmen, a fetish object has been placed in front of a police station in Umuahia. 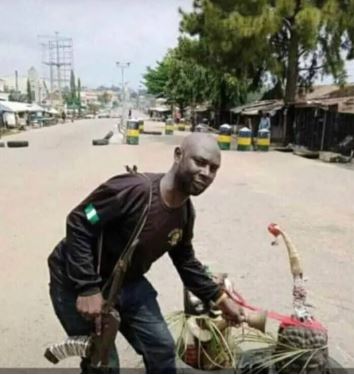 Fetish material dropped at police station to pursue unknown gunmen
Fear stricken residents of Umahia have placed a fetish object in front of a Police Area Command to ward off unknown gunmen.
The object was placed on Tuesday June 22.
Daily Trust correspondent alleged that the fetish object was placed in the area where human and vehicular movements have been restricted.
It was gathered that some residents who discussed in hushed tones, said it was placed there to protect security operatives from attacks from "unknown gunmen".
Abia is one of the south-east states where unknown gunmen have launched attacks on security formations.
Top Stories