It was gathered from some of the victims that the attacks occurred between 9pm and 10pm when the flow of traffic became slow on the bridge. 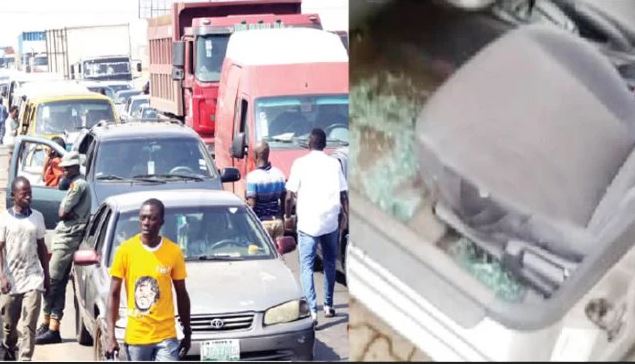 According to a report by PUNCH Metro, one person was alleged to have died, while some vehicles were vandalised as traffic robbers attacked motorists on the Long Bridge, Ogun State end of the Lagos-Ibadan Expressway on Tuesday.

It was gathered from some of the victims that the attacks occurred between 9pm and 10pm when the flow of traffic became slow on the bridge.

A victim, Mrs Adeola Akinwunmi, told our correspondent that she had yet to get over the shock of the incident, adding that she took her child from the car and fled with her husband when they saw other victims running towards her car.

Adeola, who works as a journalist for a Lagos-based media outfit, said she and other victims returned to their vehicles when the gunshots subsided, adding that vehicles that were locked were broken into by the hoodlums and the belongings of the owners and occupants were stolen.

Adeola stated that her bag containing vital documents was stolen as well as her husband’s laptop.

She told PUNCH Metro that those, who remained in their vehicles during the attack, were injured, adding that as of the time she reported the incident at the Warewa Police Station, no other victim had come forward.

Adeola stated, “It happened around 9.30pm. There was traffic on the bridge. We saw people alighting from their vehicles and running towards us. I was with my husband. He told me to unhook my seat belt and be on the alert. We alighted from our car, left it unlocked and joined the fleeing crowd. My phone was with me as we fled. We continued to hear gunshots. People, who stayed in their vehicles, were injured. We stopped when we could no longer hear gunshots and began to walk towards our cars.

“We noticed that the windscreens and windows of some cars that were locked had been shattered and the belongings of the occupants stolen. When we got to our car, my handbag with all my documents, ATM cards and ID card had been stolen as well as my husband’s laptop.

“The driver of a Hilux vehicle that was conveying an Indian man was stabbed in the head with the Indian man gasping for breath. He eventually died this morning. My husband and I drove to the Warewa Police Station to report the incident and all the things stolen from our car.”

She said many vehicles were destroyed during the raid, adding that the perpetrators jumped down from the bridge after the operation.

Another victim, Jonathan Kuruchi, said he was in his car with his wife around 9pm when he saw three men with clubs, adding that he quickly wound up the windows, but the hoodlums smashed the driver side window and threatened to stab him if he refused to surrender his belongings.

He said he narrowly escaped when the traffic eased a bit, but his car was damaged in the process.

Kuruchi stated, “I was in my car with my wife around 9pm. We were in traffic in the middle of the Long Bridge and heading towards Arepo. Suddenly, I saw three boys by the side of the road carrying big sticks in their hands. I quickly wound up my window, hoping that it was going to dissuade them. Before I knew it, they had smashed the driver side window. They brought out a knife and threatened to stab us if we refuse to surrender our belongings.

“I tried to manoeuvre my car from the lane I was in before they left me and went after other vehicles. They couldn’t take anything from us, because I didn’t stop. My car was badly damaged.”

When contacted, the Ogun State Police Public Relations Officer, Abimbola Oyeyemi, said the police were doing their best to sanitise the area around the bridge, adding that policemen engaged some of the traffic robbers in a gun battle on Tuesday.

Oyeyemi stated, “The command is doing a lot to find a permanent solution to the issue of the Long Bridge. Some of the hoodlums seized the opportunity of yesterday’s gridlock to attack motorists. Our men engaged the hoodlums in a shootout. We are combing under the bridge in case some of them died while escaping.

“The bridge is long. The robbers operate where they don’t see the police. We have combed under the bridge several times. We have arrested many there. Some have lost their lives in encounters with our men. We even facilitated the clearing of the slums under the bridge. If that place is illuminated, their activities will be reduced. We are doing our best to sanitise that place.”