A gang of suspected kidnappers sneaked into the hostel apartment of the victim, blindfolded him and whisked him away to an unknown destination. 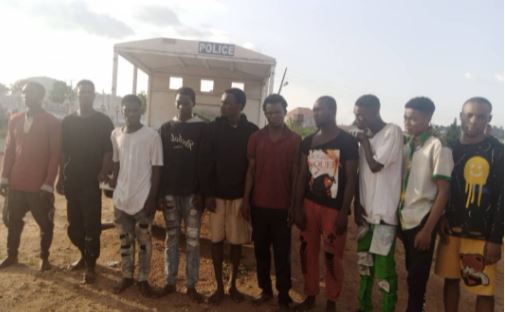 It has been reported that the Rapid Response Squad (RRS) of the Ekiti State Police Command has arrested a fourteen-man syndicate in connection with the abduction of one Akiode Akinyemi 'm', a student of Crown Polytechnic, Odo-Ekiti on  June 19.

A gang of suspected kidnappers sneaked into the hostel apartment of the victim, blindfolded him and whisked him away to an unknown destination.

A statement released by DSP Abutu Sunday, spokesperson of the state police command, says after a while, the suspects, through phone calls, started demanding for ransom to be paid as the only condition for the release of Akiode Akinyemi.

Consequently, two million two hundred thousand naira(#2,200,000:00) was paid as ransom by the victim's family members into eight(8) different Bank Accounts as provided by the suspects.

Abutu mentioned that all the suspects arrested have confessed to committing the crime and stated that the two million two hundred thousand naira(#2,200,000:00) collected as random before releasing the victim was shared among them.

He stated that the state commissioner of Police, CP Tunde Mobayo, while frowning at the act, appeals to members of the public to always partner and support the Police and other Security agencies especially in intelligence gathering that will assist in getting the Society rid of criminal elements.