The terrorists were killed when Nigerian troops engaged them in an aggressive battle at Bula Yobe axis of Banki. 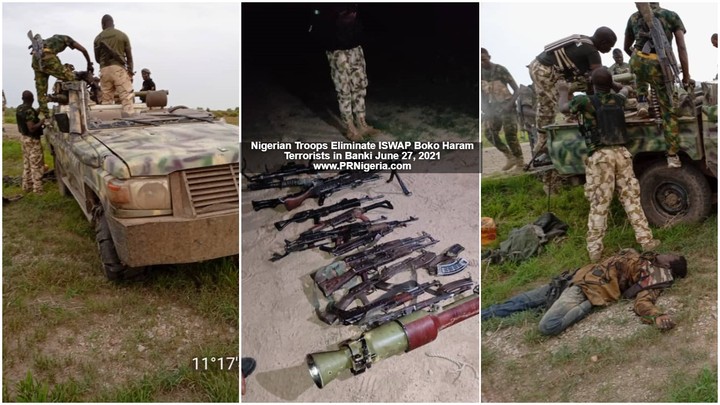 Terrorists kille by Nigerian troops
Many terrorists belonging to ISWAP and Boko Haram have been killed by troops of the Nigerian army.
According to PR Nigeria, the terrorists were killed when Nigerian troops engaged them in an aggressive battle at Bula Yobe axis of Banki in Bama Local Government Area of Borno State.
An intelligence officer told PRNigeria that the terrorists attempted to attack a military formation in the axis when they were repelled by the Troops of 21 Armoured Brigade Bama of Operation Hadin Kai, after a heavy gunfight that lasted more than two hours.
The source said: “the ISWAP-Boko Haram terrorists, suspected to have come from the Sambisa Forest, on about six gun trucks and approached the area from different directions simultaneously to wreak havoc, but met their Waterloo by the gallant troops.
“The terrorists withdrew in disarray with a large number of them suffering fatal injuries leaving behind several weapons and ammunition including anti-aircraft gun barrel, AK 47 rifles.
“Unfortunately, we lost two gallant military personnel while pursuing the fleeing remnants of terrorists after the encounter.”
Top Stories