This comes after Abia state police command on Wednesday paraded the 5-member gang.

The kidnappers arrested in Abia state
Some kidnappers who killed a victim after collecting ransom have confessed.
This comes after Abia state police command on Wednesday paraded the 5-member gang in connection with series of kidnappings and armed robberies in the state.
According to ABN, while parading the suspects in Umuahia, the state Commissioner of Police, Janet Agbede warned young people who see crime as the only means of livelihood to desist or have the security agencies to contend with.
While calling on members of the public to know their neighbours and what they do, the Commissioner of Police also called on them not to hesitate to contact the police when they notice suspicious movements.
The suspects paraded include Samuel Udochukwu 'm aged 26 years of Abala, Obingwa LGA who is Second in Command of the gang, Emeka Okedum, male a native of Osah Ukwu Obingwa LGA, Abla State-Member, Udo Onwukwe 'm aged 48 years of Urnuonu Obingwa LGA, Abla State who is the Armorer and Camp provider of the gang.
Others are, Okechukwu Obioma m aged 31 years of Umual Ntigha Obingwa LGA who is Guard for victims, Saviour Akpan m aged 27 years of lkoro Esenan in Orukanam LGA, Akwa Ibom State who is the Gang Driver
The Commissioner of Police, CP Agbede said on 25 and 26 June, 2021, based on intelligence, the Command in collaboration with IGP 1RT operatives on 'Operation Restore Peace Mission' arrested the suspects at different locations in the state in connection with series of kidnapping and armed robbery.
They confessed to have kidnapped more than six persons, she added.
While stating that the same gang also kidnapped one Aniebue Onyebuchi in Aba, she added that some of the victims identified the suspects.
Exhibits recovered from the suspects include, One AK47 Rifle with breach No. TC 6664 with 25 rounds of live ammunition, one Pump Action gun with ten live cartridges, One Locally made double barrel cut to size gun with ten live cartridges, one volkswagen Jetta car and one Victim's phone.
According to the Abia police boss, relevant information from the suspects led to arrest of the second gang suspect.
They include, Abia Daniel m aged 41 years of Item in Bende LGA, Abia State, Kelechi Nnachi 'm aged 24 years of Edda in Afikpo South LGA, Ebonyi State.
She stressed that investigation revealed that Abia Daniel was a member of the first kidnap gang but pulled out and formed his own gang where he now becomes the gang leader.
She said Abia Daniel on Thursday 24 June, at about 1900hrs, waylaid one Uzoma Ndubueze of No. 50 Ogwo street by Ohanku Aba while diving into his house. 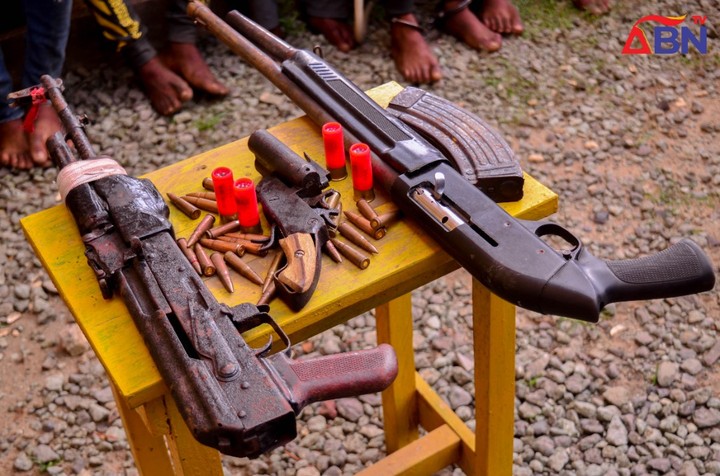 Abia Daniel and his gang took Uzoma Ndubueze with his Lexus 330 car, ash in colour to Ntigha area, shot and killed him and still collected the sum of seven hundred thousand naira (N700,000) as a ransom from the family.
The phone of the Victim was recovered from the gang leader, who confessed that his gang members are nine in number.
Exhibits recovered from them include One locally made double barrel pistol with four (4) live cartridges, the deceased victim's Techno Spark phone.
Top Stories