They explained that they boarded a bus at Dominion Motors in Ojota on Tuesday, June 29, 2021, and receipts tagged 'Journey Mercy Transport' were issued to them. 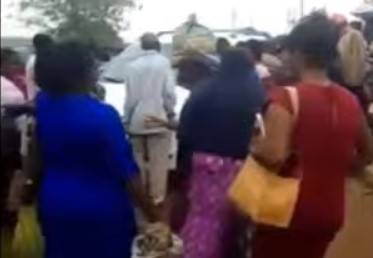 According to a report by SaharaReporters, some passengers en-route from Lagos to Warri, Delta State have in a short video clip, shared their experience about how they escaped abduction by their bus driver.

They explained that they boarded a bus at Dominion Motors in Ojota on Tuesday, June 29, 2021, and receipts tagged 'Journey Mercy Transport' were issued to them

One of the passengers who is an elderly man explained that immediately after the bus took off at Ojota Garage in Lagos, all the passengers slept off except himself and another woman.

He further explained that they regained their consciousness after they got to Satguru Maharaj Ji Village area, along Lagos-Ibadan Expressway.

"When the two of us realised that we were at Guru Maharaj Ji in Ibadan, we asked the driver why he changed our route and he immediately made a U-turn on the same lane. He got to the other side of the road where a man was waiting for him.

"He wanted to carry the man but we refused. We did not allow him to carry the man. Though others were still sleeping I struggled with him to gain control of the steering. He later stopped the bus.

"Immediately the bus stopped, a man in police uniform came out from nowhere and collected the key from me," the passenger said

Other passengers reportedly woke up immediately after the bus stopped and their suspicions were raised by the sudden appearance of the police officer suspected to be one of the driver's accomplices.

This made the passengers call the attention of the operatives of the Amotekun outfit to the place.

"We woke up when the bus stopped. That was when we realised what was going on. All of us except those two slept off throughout. After we came down from the bus, people started gathering around us," another passenger explained.

The driver has been handed over to security operatives from the Amotekun outfit while an investigation is ongoing.