The suspects were arrested for descending on the officers, hitting them with different weapons and tearing their clothes. 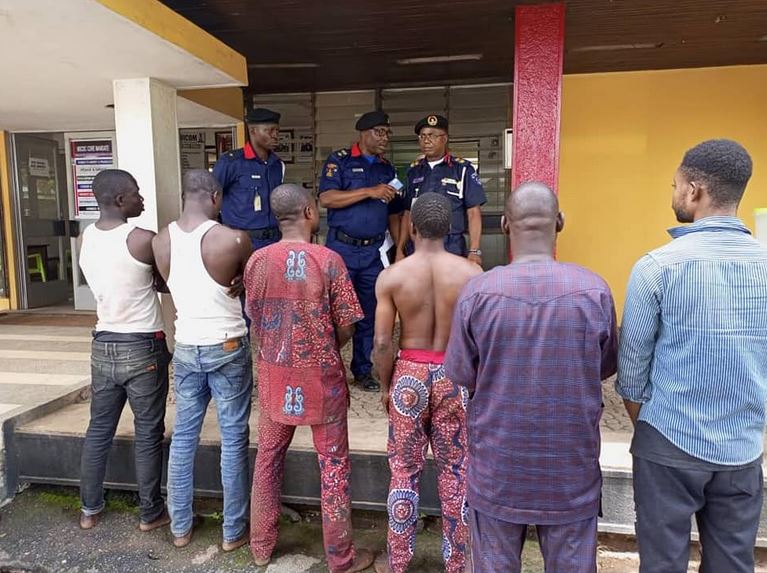 Five suspects have been apprehended over an alleged attempt to kill officials of the Nigeria Security and Civil Defence Corps (NSCDC) in Oyo.

Speaking on the arrest during a press briefing, on Thursday, July 1, the Oyo State Commandant, Michael Akintayo Adaralewa, said that the suspects, Abiodun Abraham, Abiodun Akinola, Gbenga Abraham, Ramoni Oyewole and Babatunde Temito, committed the offence, on Tuesday, at the Agugu area of Ibadan.

Adaralewa disclosed that the civil defence officials had gone to the scene to arrest Abiodun Abraham in relation to a case of stealing when he started shouting and calling on people around the area to rescue him from kidnappers.

The Commandant stated that the false alarm prompted hoodlums to descend on the officers, hitting them with different weapons and tearing their clothes.

He added that they also hanged tyres on the necks of the officers and were about setting them ablaze when a team of Operation Burst operatives passing by noticed the commotion and drew near, before noticing that those being attacked were civil defence officers.

The commandant said further that the officers were quickly rescued while the Operation Burst operatives called for reinforcement.

The Commandant said that those arrested were suspected of being part of the attackers, as they followed the vehicle being used to convey the principal suspect from the scene.

Condemning the jungle justice being perpetrated by some residents without seeking verification of culpability or none by the targeted victims, the Commandant warned that the wrath of the law would be brought on the violators of the law.

In an interview with the Nigerian Tribune, one of the arrested suspects, Akinola, said that he was not one of those who attacked the civil defence officers but only followed the vehicle that took him away from the scene because the principal suspect was his boss during his vocation as a caterpillar engineer.

He confirmed the attack on the officers but said that he was able to save one of them from the hoodlums.

Gbadamosi claimed that a customer had deposited N120,000 notes with him, unknown to him that they were fake notes.

He said that he got into trouble when he spent the notes for another person who discovered that they were fake.