Okorie Uguru recalls his last moments with the late founder of the Synagogue Church of All Nations, T.B. Joshua. 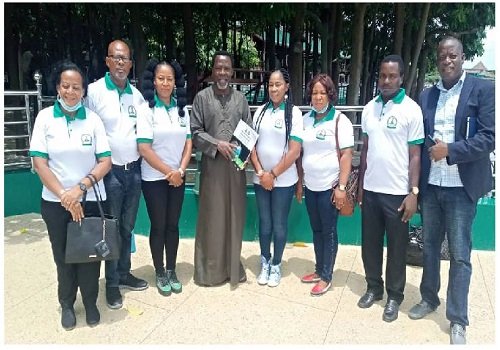 Okorie Uguru, a tourism journalist, who visited the late Prophet T.B. Joshua alongside a team from National Institute of Hospitality and Tourism (NIHOTOUR) at his Prayer Mountain in Agodo-Egbe, Ikotun, Lagos days before he passed recall his last moments and wishes.

The Lagos zonal office of the National Institute of Hospitality and Tourism (NIHOTOUR) had written a letter to the late Prophet T.B. Joshua requesting to pay him a courtesy visit, for which he granted an appointment for Thursday, April 29, 2021.

The visit took place at the SCOAN Prayer Mountain Resort, Agodo-Egbe not far from his Ikotun Synagogue Church, where the late prophet had been staying since the outbreak of COVID-19. The SCOAN Prayer Mountain was where the Synagogue Church of All Nations (SCOAN) started. This writer was part of the NIHOTOUR team. It turned out to be his last encounter with the prophet.

Before meeting him, the late prophet had instructed one of his aides to take the team round the multi-billion naira expansive facility. For tourism practitioners who had been privileged to visit world class facilities in different parts of the world, the SCOAN Prayer Mountain Resort was clearly of world-class standard.

After about an hour’s tour of the facility, our team was ushered into a meeting room to meet with the prophet. He came down after about 10 minutes.

For those familiar with the late prophet, he used to dress simple to meet with people. His favourite attires were T-shirt, half trousers and palm slippers. However, on this Thursday, Prophet T.B. Joshua came down wearing a grey colour free flowing Jhalabia robe. This was usually the kind of attire he wore when praying and fasting.  Prophet T.B. Joshua walked down from a winding metal staircase into the meeting room. Apart from the unfamiliar attire, he was not exactly ebullient like he used to be. The warm and accommodating welcome was there, but there was no spark. This reporter assumed that he might be in a period of praying and fasting, which was common with him, especially since he was still in his robe.

The NIHOTOUR Lagos Zonal Coordinator, Chinyere Ibeabuchi, explained to him that the team decided to visit him in acknowledgement of his huge contributions to the development of tourism in the country. She also requested for support for the zone from the prophet.

Prophet T.B. Joshua, in his response, thanked the team for the visit, promising to support NIHOTOUR. He said: “We are all in the same industry, but ours is at a higher level; it is all about service to humanity.”

After the meeting, the team requested for a group photograph with the prophet while handing over a magazine from the institute to him. In order not to stress him, the team suggested that the photograph be taken inside the meeting room, but the prophet insisted that it was best taken outside with the beautiful and natural scenery all around.

After the photo session, the guide was to take the team on the Prayer Walkway inside the resort. The prayer walkway stretches for between one and half to two kilometers. The prophet walked with the team for several meters before returning.  While on the walkway, this writer went to him to find out whether he intended to open up the resort during his birthday as he had once said before during one of his ministrations. Prophet T.B. Joshua answered in the affirmative.

Although the late Prophet T.B. Joshua gave the world a sneak preview of the resort through his pre-birthday message video, he is not alive today to physically welcome visitors to one of his biggest accomplishments in life.