The 18-year-old girl was shot dead for refusing to marry her cousin. 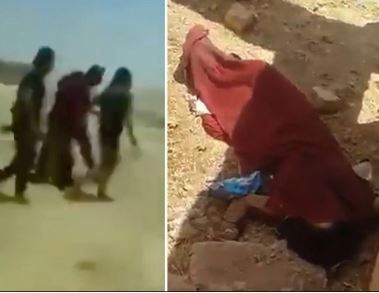 Syrian girl killed by kinsmen
A teenager girl has been killed by her kinsmen for refusing to marry her cousin.
The teen was shot dead by 10 men in an "honour killing" that was filmed.
Eida Al-Hamoudi Al-Saeedo, 18, is said to have tried to run away with her lover but her family and tribe followed her, according to Akhabaralaan.net.
In a horrific video shared online, Eida is dragged by three men who are carrying guns while she screams for help in the shocking footage.
She was then taken to a desolate village on the outskirts of Al-Hasakah, a city in the north east of Syria.
The video then shows the other men standing by a wall of an abandoned house, after which three shots ring out.
Eida is then shown lying on the ground and appears to be struggling to get up when a man points a gun at her head and shoots her dead.
Her body is then covered with a red blanket.
Eida was shot in an "honour killing" after she fell in love with a young man and refused to marry her cousin, according to the Syrian Observatory for Human Rights (SOHR).
The man is said to have proposed to Eida but her family forbade the marriage because he was from a different tribe.
The Violations Documentation Centre in northern Syria said Eida had been starved and beaten for a number of days before being executed by her family.
"[She was] brutally assaulted until the crime was completed by killing her with machine guns and pistols by more than one person," a spokesperson for the center said.
The centre said in a Twitter statement: "Her sin was to love another man whom they couldn't touch fearing of reprisal between the two families."
The man who Eida fell in love with is said to have managed to escape from the tribe as the family "feared a reprisal" if he had been attacked.
The video has been widely condemned by activists and women’s groups who have called for the perpetrators to be prosecuted and for the killing of women to stop.
Writer Sameh Shukri said on Twitter: "A new crime of honor and racism against women, killing a Syrian girl in the city of #Hasakah for accusing her of love and adultery." 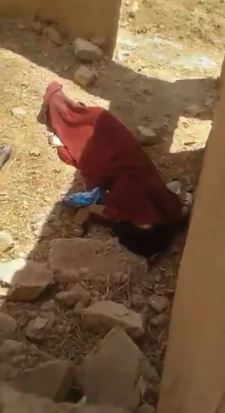