In a recent video, Bobrisky could be spotted in a black gown dancing to a song, while flaunting his backside. 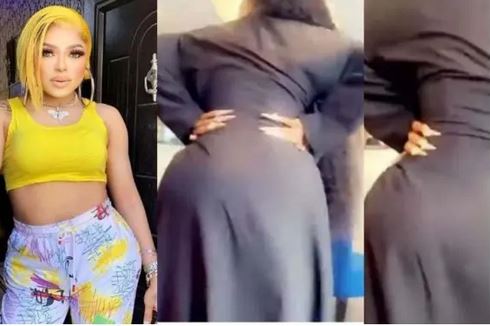 Controversial crossdresser, Bobrisky has left everyone in shock as he took to social media to flaunt his backside after he underwent cosmetic surgery.

He had kept his fans in suspense ever since he concluded the process while claiming that he is waiting patiently for the D-day.

In a recent video, Bobrisky could be spotted in a black gown dancing to a song, while an unseen videographer captured the scene.

Amid cheers and praises, the crossdresser showed off his backside which seems to have added in size, this goes a long way to show that the doctors really did some massive works.

Getting to this point was not an easy ride for the crossdresser, as he was rushed to the hospital nights after the surgery, due to “massive pain” on the hips.

He would go on to host a party of 10 persons on Friday to flaunt his body, while pledging to give the two fans the sum of 100k each.

8 friends, two lucky fans. You are invited next week Friday let party hard. The two fans are going home with 100k each thanks for coming to party with d baddesT. Pls dress to kill cos I’m definitely slaying die"