Buhari, Osinbajo Live Large On 18 Jumbo Allowances Why Nigerians Suffer, Here Is What They Currently Earn As Salaries 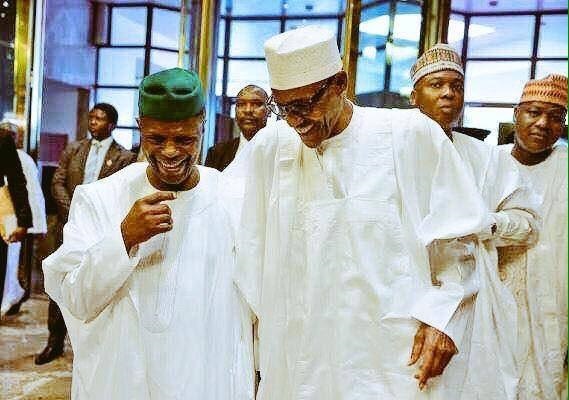 Osinbajo and Buhari
While Nigerians lament, suffer and cry due to the suffering, inflation and high cost of living, President Muhammadu Buhari and his vice, Yemi Osinbajo live large on 18 jumbo allowances.
According to Sahara Reporters, just the official monthly salary of Buhari is about N1,171,568. There are, however, 18 jumbo allowances that are paid to the President monthly with no justification.
The President is entitled to hardship allowance of N146,446 per month and Consistency allowance at N732,230 per month.
That is why no matter the amount of hardship in the country, they are never affected.
SaharaReporters learnt that apart from his salary, the President is entitled to no fewer than 18 allowances which are Personal assistant allowance, constituency, vehicle fuelling/maintenance, domestic staff, entertainment, recess, newspaper/periodicals, utilities, houses maintenance, security, special assistant, furniture, wardrobe, duty tour, accommodation, estacode, and medical allowances.
The salary breakdown was given by the Revenue Mobilisation Allocation and Fiscal Commission.
The commission is empowered by section 32(d) of Part1 of the Third Schedule of the Constitution to determine the revenue suitable for political office holders.
Meanwhile, the Vice President, Prof Yemi Osinbajo, earns N1, 010,524.17 monthly and N12, 126,290 yearly.
He also is entitled to various allowances, including N126,315 monthly as hardship allowance and N631,577 monthly as Consistency allowance.
Other allowances for the top political office holders are accommodation allowance, furniture, duty tour allowance (per night), motor vehicle fueling, and maintenance.
The amounts for each of these allowances are to be provided outside the official revenue mobilization allocation framework.
SaharaReporters gathered that many of the allowances paid to Buhari and Osinbajo are kept away from the knowledge of Nigerians, particularly as relating to medical allowances, as the President has traveled out abroad for medical trips more than any sitting Nigerian president.
Despite the bleeding economy, which is currently grappling with $33billion foreign debts, the federal government has failed to yield to demands to cut the jumbo allowances paid to political office holders, including members of the National Assembly.
In 2015, President Buhari announced that he would only be collecting half of his monthly salary but it's not certain he is still taking a paycut six years after.
Only on Monday, a rights organization, the Socio-Economic Rights and Accountability Project (SERAP), asked the Federal High Court in Abuja to order the RMAFC and the National Salaries, Incomes and Wages Commission (NSIWC) to review downward the remuneration and allowances of Buhari, Osinbajo, the 36 governors and members of the National Assembly.
The group had said the duo should do this by performing their statutory functions.
SERAP, in a suit number FHC/ABJ/CS/658/2021 filed last Friday, sought “an order of mandamus to direct and compel the RMAFC to send its downward review of the remuneration and allowances of these high-ranking public office holders and recommendations to the National Assembly for appropriate remedial and legislative action, as provided for by the Nigerian Constitution 1999 (as amended).”
SERAP said slashing jumbo pay for the high-ranking political office-holders would reduce the unfair pay disparity between political officer holders and judicial officers.
SERAP is also seeking “an order of mandamus to direct and compel the RMAFC to perform its mandatory constitutional duty to urgently review upward the remuneration, salaries, and allowances, as well as the conditions of service for Nigerian judges.”
Joined in the suit filed on behalf of SERAP by its lawyers, Kolawole Oluwadare and Ms. Adelanke Aremo, are Senate President, Ahmad Lawan; Speaker of House of Representatives, Femi Gbajabiamila, for themselves, and on behalf of all members of the Senate and House of Representative; and the National Judicial Council.
Top Stories