Sharing her recovery process on Twitter, the First Lady shared photos from the American hospital she was transferred to after the attack. 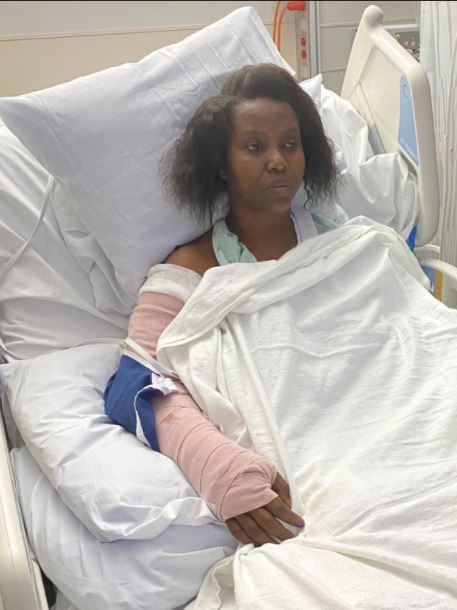 The First Lady of Haiti, Martine Moïse has shared photos of herself on her hospital bed, following the assassination attempt which claimed her husband's life and left her hospitalised.

The First Lady Martine Moïse was shot at least three times during an assassination attack at their home.

Sharing her recovery process on Twitter, the First Lady shared photos from the American hospital she was transferred to after the attack.

She also mourned the tragic death of her husband as she express shock that her husband, the president died before her eye.

Her message, translated to English, reads: “Thank you to everyone who’s helping me pray to return to life. Because when you’re hospitalized your life is God’s hands and doctors. Me, Martine Moïse, I still don’t believe that my husband left like this before my eyes without saying a last word to me. This pain will never pass.”

In another tweet the First Lady thanked the doctors for their care and kindness, while showing her bandaged arm, she wrote, “Thank you for the team of guardian angels who helped me through this terrible time. With your gentle touch, kindness and care, I was able to hold on. Thank you! Thank you! Thank you!”

Meanwhile, the Haitian police have arrested a 63-year-old man named Christian Emmanuel Sanon on Sunday, July 11, who is believed to be the mastermind behind the attack on the President.