It was also learnt that some Nigerians who do not have prepaid electric meters are now increasingly using electric cookers in a bid to reduce their cooking gas usage. 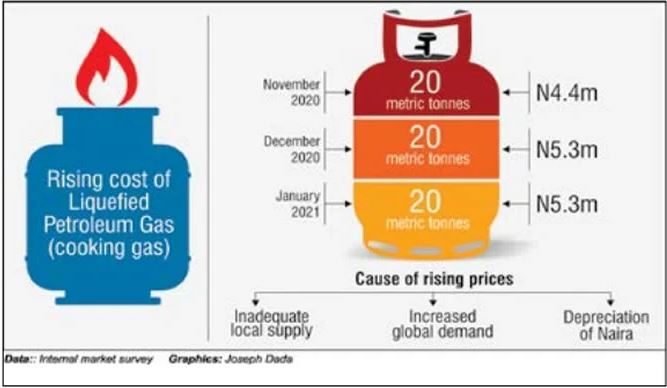 According to a report by The PUNCH, the price of Liquefied Petroleum Gas, also known as cooking gas, has skyrocketed to a record high of N500 per kilogramme, forcing some Nigerians to turn to alternatives such as charcoal, kerosene and firewood amid high unemployment and poverty levels in the country.

The price of cooking gas has risen by more than 60 per cent since early December last year on the back of the recent devaluation of the naira and lingering inadequate domestic supply of the fuel.

The PUNCH gathered that as cooking gas prices maintained an upward trend in recent months, more Nigerians, especially in the rural and semi-urban areas, have been discouraged from using the fuel for cooking.

It was also learnt that some Nigerians who do not have prepaid electric meters are now increasingly using electric cookers in a bid to reduce their cooking gas usage.

The PUNCH had reported on January 21 that the price of 20 metric tonnes of LPG sold to marketers in the country had risen by over 29 per cent in the past two months to as high as N5.5m from N4.25m on November 20.

The price of 20MT of LPG sold by terminal operators and importers surged by 30.91 per cent in six months to N7.2m on Thursday, according to LPG in Nigeria, an advocacy organisation championing the use of the fuel in the country.

“As the dollar is appreciating against the naira, the price of LPG is increasing,” he added.

In May, the Central Bank of Nigeria devalued the naira as it adopted the NAFEX exchange rate of N410.25 per dollar as its official exchange rate. The naira traded at 503/$1 at the parallel market on Thursday.

Umudu suggested that the Nigerian LNG Limited, which accounts for more than 40 per cent of the LPG supply volumes in the country, should be supplying the domestic market in accordance to the demand, rather than having a fixed quantity per annum.

He said, “The increase in cooking gas price, which started last December, doesn’t speak well of the policy direction of the government.

“As much as I will not advocate for subsidy the way it is being done with petrol, I think there are ways the government could make cooking gas affordable to Nigerians.

“People in rural areas and semi-urban areas, who are even the major target of LPG expansion, are beginning to dump their cylinders. It is not a good development.

“Cooking gas sales have dropped by 50 per cent at my outlet in Anambra State. People are now using firewood, sawdust and charcoal.”

According to Umudu, in Lagos and some other major cities, some canteens and restaurants are now turning to charcoal and firewood because they cannot factor the hike in cooking gas appropriately into their costs.

“Government should work out a framework with NLNG to meet up with local demand and equally encourage other multinational companies to supply the domestic market so that we stop talking about importation of LPG,” he added.

A resident of Oworonshoki, Lagos, Mr Adeleke Adeshina, said the increase in the price of cooking gas had affected the quantity of food sold to customers by food vendors.

The Executive Secretary/Chief Executive Officer, Nigerian Association of LPG Marketers, Mr Bassey Essien, said with 20MT of LPG being sold for over N7m, marketers were spending what they used in buying 40MT some months ago to get 20MT.

“We are not happy about the price hike,” he said, stressing the need for frequent supply of LPG by the NLNG. “It is only one vessel they (NLNG) have, and it supplies Lagos and Port Harcourt; so the replacement cycle is longer,” he added.

According to him, since the country depends more on imports for the commodity, the demand for scarce foreign exchange by marketers to import the product will cause price hikes.

“There is a need for the domestic supply to be increased so that we can have less dependence on importation,” Essien added.

The NLNG said in September that its board of directors had approved an increase in its dedicated volume of LPG supplied to the domestic market from 350,000 metric tonnes per annum to 450,000 mtpa.