Some of the residents of the Katsina metropolis expressed worry over the flooding of some major streets due to the heavy downpour. 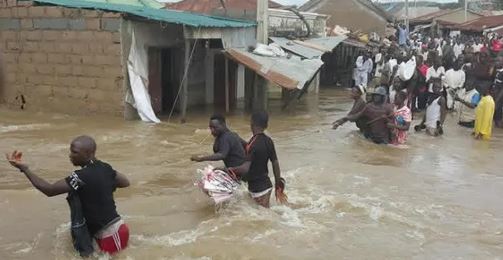 Two lives have been lost and 1500 houses have been destroyed by floods following a heavy downpour in three Kaduna Local Government Areas.

Alhaji Umar Mohammed, the Public Relations Officer (PRO) of the agency said over 800 houses were affected in Faskari, 400 in Bindawa and 300 in Sabuwa Local Government Areas (LGAs).

Mohammed said the agency was already looking at how to assist the victims.

The heavy rain started at about 10 a.m on Monday and stopped at about 4 p.m..

It forced many motorists to abandon their vehicles.

Some of the residents of Katsina metropolis who spoke to NAN expressed worry over the flooding of some major streets due to the heavy downpour.

Many motorists driving along Kofar Kaura roundabout and some parts of the layout area of the metropolis were able to divert by using a single lane of the road to their various destinations.