The convicts who were prosecuted on separate charges pleaded guilty to the charges preferred against them by the anti-graft agency. 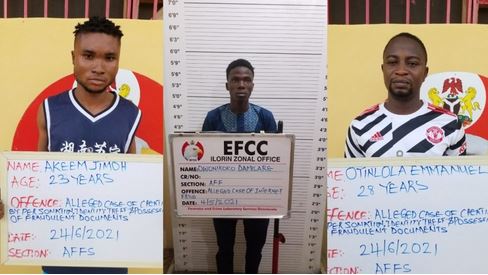 Three Yahoo boys have been arraigned by the Ilorin Zonal Office of the Economic and Financial Crimes Commission, EFCC, on Wednesday,  over offences bordering on love scam and cybercrime.

The three convicts are Prince Oyinlola Adedayo Emmanuel, Owonikoko Kehinde Damilare, a 200 Level Computer Science Student of the University of Ilorin and one Jimoh Akeem Lawal.

The convicts who were prosecuted on separate charges, pleaded guilty to the charges preferred against them by the anti-graft agency before Justice Mahmood Abdulgafar and Justice Sikiru Oyinloye, both of the Kwara State High Court in Ilorin.

Oyinlola, 28, who identified himself as a prince from Odo-Otin Local Government Area of Osun State, was found guilty by Justice Abdulgafar and sentenced to six months imprisonment at Mandala Correctional Centre, which shall be suspended for one year.

The court ordered that the phone and laptop recovered from him be forfeited to the Federal Government.

According to the judge, “the sentences shall run concurrently and shall be suspended for one year”.

The court also ordered the forfeiture of the money in the convict’s bank account, phones and laptop, which were used to perpetrate the crime to the Federal Government.

The Judge ordered that the iPhone, laptop and the manager’s cheque (bank draft) of N112,500 (One Hundred and Twelve Thousand, Five Hundred Naira) which he raised be forfeited to the Federal Government.