The doctors lamented that the Federal Government only negotiates with health workers when industrial action is introduced. 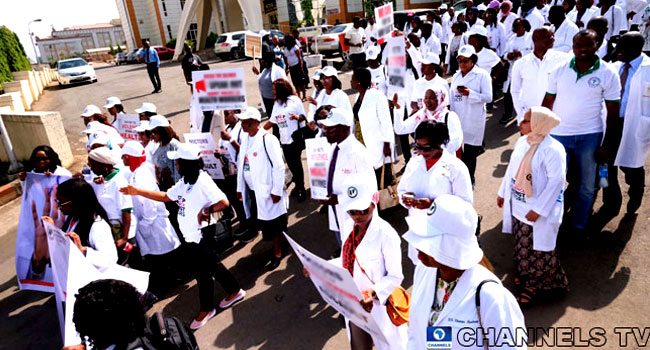 Resident doctors protest
Resident doctors have lamented over negligence by the Muhammadu Buhari-led government.
Dr. Akanimo Ebong, President of the Association of Resident Doctors at the National Hospital in Abuja on Monday said that the Federal Government barely negotiates with health workers until an industrial action is introduced.
Ebong, who is also the Senior Registrar at the National Hospital’s Department Of Obstetrics And Gynaecology, made the remark while speaking on Channels Television’s Sunrise Daily.
The National Association of Resident Doctors (NARD) had resumed its industrial action on Monday over unpaid salaries and benefits.
The doctors are also demanding the immediate withdrawal of a circular removing House Officers from the scheme of service.
They had embarked on an earlier strike in April, leaving many patients unattended across government-owned hospitals in the country.
The strike was suspended 10 days later after they met with Federal Government representatives.
But very little progress has been made since then, Dr. Ebong said.
“Usually there is no negotiation done, until we go on a strike,” he said.
“We have resumed our strike today. We never called it off, we only suspended it to give time for negotiations.
“But since we called off the strike on April 10, barely nothing has been done.
“When we are back at it, you know we’ve given a lot of time; we’ve tried to negotiate, we’ve tried to make the system work. But unfortunately, we are here again.”
Top Stories