Angered by the sudden killing, the gathering reportedly descended on the gun-wielding vigilante member and clubbed him to death. 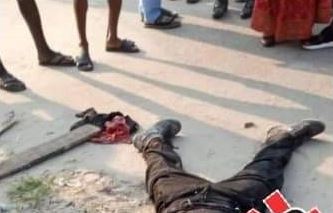 A vigilante member lost his life after he was beaten to death as he accidentally shot  Mr Fredrick Ighoshemusua, the outgoing President-General of Ukpiovwin community in Udu Local Government Area of Delta State while jubilating.

The tragic incident happened during the swearing-in ceremony of new executive committee of the community on Thursday, July 29.

According to report, Ighoshemusua, 50, met his untimely death shortly after formally handing over the baton of leadership to his successor at the event held at the community’s secondary school.

While the deceased was taking a group photograph with the new executives, the vigilante member started shooting in the air in celebration. The pump-action gun was said to have stopped working at some point so he tried to fix it.

It was in the process of fixing the gun that it exploded in the direction of the outgoing President General’s chest, killing him on the spot.

Angered by the sudden killing, the gathering reportedly descended on the gun-wielding vigilante member and clubbed him to death.

"Ighoshemusua tenure as President General of the community has expired and he has successfully handed over to his successor. While the celebration was on, the outgone PG left for his house. After some time, it was discovered that the man was no longer there and they sent for him to take part in a group photograph,” a community source narrated to journalists.

Confirming the incident, the State Commissioner of Police, Mr Ari Muhammed Ali, told journalists that the vigilante member shot the community leader in error after making futile attempts to shoot into the air to add colour to the ceremony.

"It was in the process of taking the group photograph that the vigilante member started shooting in the air in celebration. At a point, as he was shooting, his pump-action gun did not respond," the CP stated.

"He brought the gun down and was trying to fix it when it exploded in the direction of the outgone President General’s chest and he died on the spot. When the vigilante man saw what happened, he quickly took a motorcycle and was headed to the police station to report the matter, but some angry youths gave him a hot chase and stopped him at the railway line. They brought him back to the community and beat him to death." he added.