The lawyer to the detained aides, Pelumi Olajengbesi, had prayed the court to admit the Igboho aides to bail. 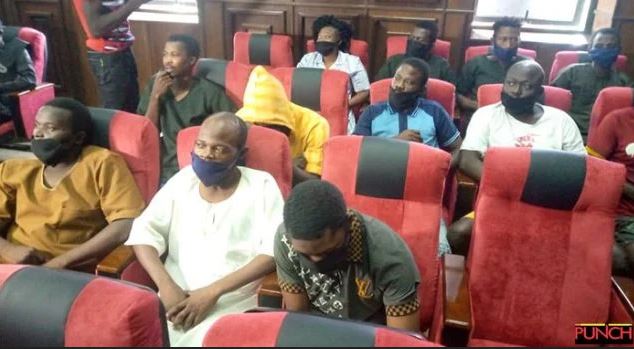 Some of the aides of Yoruba Nation agitator, Sunday Adeyemo, at the Federal High Court, Abuja, on Wednesday. Photo: Olatunji Obasa

According to a report by The PUNCH, the Federal High Court sitting in Abuja has gone on a short recess to prepare its ruling on the bail application brought before it by the 12 detained aides of Yoruba Nation agitator, Sunday Adeyemo, popularly known as Sunday Igboho.

The lawyer to the detained aides, Pelumi Olajengbesi, had prayed the court to admit the Igboho aides to bail.

The lawyer to the Department of State Services, I. Awo, told the court that he was not opposed to the bail of eight of the applicants.

However, he vehemently opposed the bail of the other four applicants on the ground that the DSS’ investigation has revealed their high complicity in the offence of arms’ stockpiling.

The DSS lawyer argued that the four aides should not be granted bail in the interest of justice and national security.

He also stated that their investigation was currently ongoing and has not been concluded.

Awo submitted that once investigation is concluded, the DSS would not hesitate to charge them to court.

“The fear of the respondent is that if granted bail, they will not make themselves available for further investigation and possible prosecution,” Awo argued.

The lawyer to Igboho aides, Olajengbesi, prayed the court to discountenance the argument of the DSS as it was unknown to Nigerian law.

Olajengbesi stated that the Igboho aides have been detained by the DSS for 34 days since July 1, 2021, and are yet to be charged to court for any offence.

He argued that their continued detention violated the provisions of the constitution and was an infringement on their fundamental human right.

Olajengbesi also argued that the DSS does not need 34 days to investigate a person that they claimed was found with firearms.

Olajengbesi urged the court to release the Igboho’s aides on bail and assured the court that the applicants would be available for further investigations.