The citizens had hidden in the plane evacuating some of the people when the incident occurred. 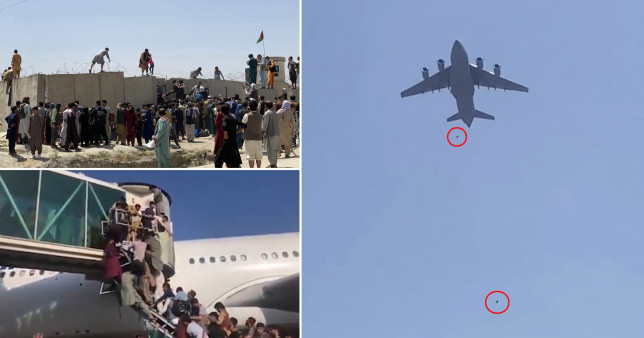 Some of those trying to escape the country fall to their death
Many people have reportedly fallen off a plane after trying to stowaway following the capture of Kabul by Talibans.
The citizens had hidden in the American plane evacuating some of the people when the incident occurred.
According to Metro UK, footage showed countless people jumping aboard the outside of a US Air Force plane departing the Afghan capital.
Now new images seem to suggest some of them have fallen from the sky and hit the ground below.
A video also seems to show two people falling from the aircraft soon after takeoff.
Metro.co.uk has also seen a graphic image apparently depicting the remains of one of the bodies on the ground.
The plane was seen trying to take off from a runway flooded with locals desperately trying to flee the Taliban amid carnage in the capital Kabul.
A Kabul news agency reported: ‘BREAKING NEWS – Locals near Kabul airport claim that three young men who were holding themselves tightly in the wheels of an aeroplane fell on top of people’s houses.
‘One of the locals confirmed this and said that the fall of these people made a loud and terrifying noise.’
Top Stories