The order for the deployment of 6,000 American troops to Afghanistan was given by President Joe Biden. 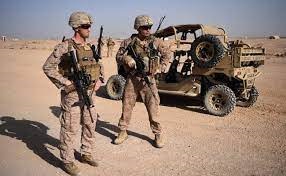 U.S. President Joe Biden has given an order for 6,000 troops to be deployed to Afghanistan.
The task of the troops is to assist in the evacuation of its citizens, allies and Afghan partners out of the country, according to NAN.
Speaking to the American public from the White House on Monday, Biden said the troops were working to secure the Hamid Karzai International Airport to enable their safe departure.
“Over the coming days we intend to transport out thousands of American citizens who have been living and working in Afghanistan while also continuing to support the safe departure of civilian personnel of our allies who are still serving in Afghanistan.
“The U.S. military will assist with moving special immigrant visa-eligible Afghans and their families out of Afghanistan,” the president said.
The U.S. leader said there were others who would be eligible for movement out of the country as well.
“American troops are performing this mission as professionally and effectively as they always do. But it is not without risks.
“As we carry out this departure, we have made it clear to the Taliban that if they attack our personnel or disrupt our operation, the U.S. response will be swift and forceful.
“We will defend our people with devastating force if necessary,” he said.
Biden said he could not and would not ask the U.S. troops to fight on endlessly in another country’s civil war, taking casualties, suffering life-shattering injuries, leaving families broken by grief and loss.
“This is not in our national security interest and it is not what the American people want,” he said, explaining the rationale for departure.
Biden defended his administration’s decision to continue with the U.S. military drawdown in Afghanistan, blaming the U.S.-backed Afghan government and military for allowing the Taliban to take over.
“Afghanistan political leaders gave up and fled the country; the Afghan military collapsed, sometimes without trying to fight.
“If anything, the developments of the past week reinforce that ending U.S. military involvement in Afghanistan now was the right decision,” said Biden.
He said he stood firmly by his decision and argued that he was faced with a choice to either follow through with the drawdown or escalate the conflict into its third decade and ultimately sacrifice more American lives.
“I stand squarely behind my decision.
“After 20 years, I’ve learned the hard way that there was never a good time to withdraw U.S. forces. That’s why we’re still there,” he said.
After seizing large swaths of territory in recent months, the Taliban on Sunday took control of the capital, Kabul, home to some six million people.
President Ashraf Ghani has fled the country, according to media reports, and desperate residents have been scrambling to the airport to get flights out.
Top Stories