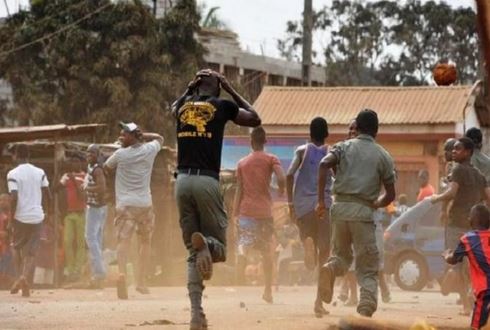 According to a report by Daily Post, there was sporadic gunshots at Agodi-Gate area of Ibadan on Wednesday after some immigration officers allegedly harassed a local government chairman and some of his aides.

It was gathered that trouble started when some youths who were protesting against the killing of a teenager in Ibadan stormed the area.

Daily Post had earlier reported that the youths blocked major streets in Ibadan on Wednesday.

They blocked Mokola Road, parliament Road and Secretariat Road for some hours.

It was, however, gathered that the council boss and some of his close aides were harassed by the immigration officers who were at the area when the youths were protesting.

This then resulted into sporadic gunshots which rented the air for some minutes.

Efforts made by DAILY POST to ascertain what led to the altercation proved abortive as of the time of filing this report.

A source also revealed that some of the immigration officers were injured during the clash.

Sporadic gunshots can be heard in the video that has now gone viral which was obtained by DAILY POST on Wednesday.

Public Relations Officer of NIS in Oyo State command, Mr. Olufemi Adetunji when contacted, noted that he cannot speak on the matter now.

Adetunji said, “I can’t talk on this tonight”.