Recall that Bello had insisted that Tinubu should rest and allow younger Nigerians to lead the country in 2023. 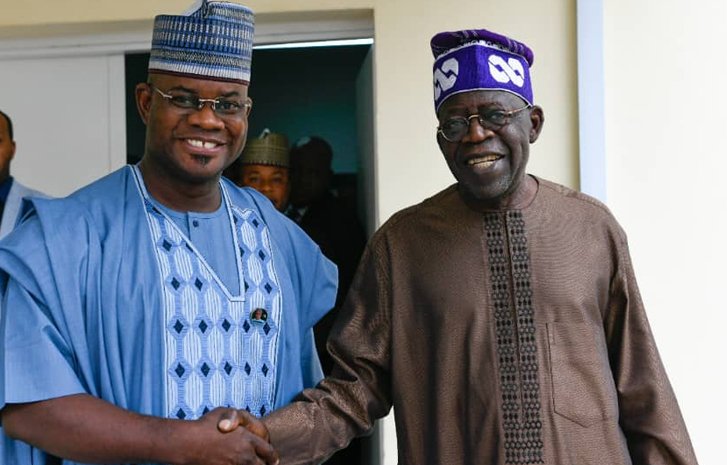 Bello and Tinubu
Governor Yahaya Bello of Kogi state has been described as a 'failed governor' by a support group For the National leader of the All Progressives Congress.
Recall that Bello had insisted that Tinubu should rest and allow younger Nigerians to lead the country in 2023.
Reacting through the Director- General of the Tinubu Support Group, Umar Ibrahim, in Abuja, on Sunday, the group accused Bello of betraying the not-too-young-to-run campaign with his failure as a governor.
The statement reads in part:
“All Nigerians can attest to the fact that Governor Bello of Kogi State is a disgrace to the Not-too-Young-to-Run campaign. How do we commit a great nation such as Nigeria to a so-called youthful governor who was given an opportunity to lead his state and he messed things up?”
“It is on record that you, governor Bello, remain the governor with the highest number of months of unpaid salaries, and nonperformance despite the huge sums of both internal and federally-generated revenues.”
“We advise that you channel all your efforts into begging and praying for forgiveness for all the sufferings you have inflicted on the good people of Kogi state rather than eyeing the presidency.”
According to the group, Tinubu is the most qualified person to lead Nigeria in 2023.
Top Stories