Oil Price Jumps to $68 After Days of Losses


This comes after a seven-day losing streak that was crude’s worst since 2019. 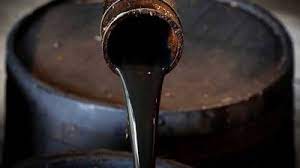 The international oil benchmark, Brent crude staged a come back rising to $68.78 per barrel on Monday.
This comes after a seven-day losing streak that was crude’s worst since 2019, as the dollar pulled back and traders bet the recent selling was overdone.
Brent, against which Nigeria’s crude oil is priced, rose by $3.58 to $68.76 per barrel as of 8:05pm Nigerian time on Monday, after posting its worst week since October 2020.
“News of zero new cases in China has certainly provided a tailwind as it gives added light at the end of the COVID tunnel and a breath of fresh air to the demand landscape,” analysts at Blue Line Futures were quoted by CNBC as saying.
“Additionally, the US dollar has retreated from recent highs, underpinning the commodity landscape broadly,” they added.
West Texas Intermediate crude futures, the US oil benchmark, gained $3.50, or 5.6 per cent, to settle at $65.64 per barrel.
Earlier in the day, it rose more than six per cent to hit a session high of $66, at which point it was on track for its best day since November.
The sharp jump marks a turnaround from last week when the contract sank nearly nine per cent for its worst weekly performance since October 2020 and second negative week in three. WTI ended Friday at its lowest level since May 20.
Oil’s tumble came amid fears of a demand slowdown as the delta variant of COVID-19 spreads, leading to new lockdowns in countries including Japan and New Zealand.
Additionally, weak economic data out of China, which is the world’s largest crude importer, weighed on prices. The latest US inventory report also showed a rise in gasoline stocks as well as an uptick in output from US producers.
But some Wall Street firms said the selling looked overdone.
“We find this price weakness excessive and believe it has more to do with the psychology of market participants than with any deterioration of fundamental data,” said analysts at Commerzbank.
Goldman Sachs, meanwhile, said that macro headwinds including the reflation unwind and Covid concerns in China are veiling the bullish backdrop for oil and commodities more generally.
Top Stories