Benue APC Reps Candidate Defects To PDP With Over 6,000 Supporters


The All Progressives Congress has lost over 6,000 supporters in Benue state. 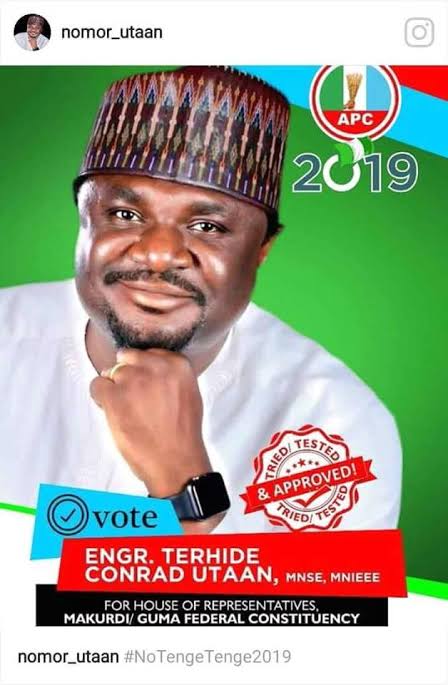 A stalwart of the All Progressives Congress, APC has dumped the party and crossed over to the Peoples Demcratic Party.
Mr. Conrad Utaan, who is a House of Representatives candidate for Makurdi/Guma constituency in the 2019 general elections decamped to the PDP with over 6,000 of his supporters in Guma Local Government Area, LGA on Monday.
Addressing the gathering at the Government Science and Technical College playground Gbajimba, Guma LGA, Mr.Utaan said he was compelled to dump the APC with his teeming supporters because the party in the state had become “one man party.”
He said the party had become a sinking ship and faced the prospect of extinction from the state because of the questionable decisions by a single individual that had chased away its members from the party.
He said, “people spent their hard earned money to buy nominations forms for the Ward Congresses but they were denied participation in the process because names were picked by an individual at his residence.
“I was one of the stalwarts of that party but today I have decided to defect to the PDP with 6,000 of my supporters because of the fraud that denied us our rights in the party.
“I appeal to the PDP and Governor Samuel Ortom who is a man of peace, wisdom and impeccable character to please accept us into the PDP which is truly a party for the people.”
In his remark, the Senator representing Benue North East district, Senator Gabriel Suswam said the defectors took the right decision to move to a party that had the interests of all Benue people at heart saying that their defection was timely as it would add to the strength of the party ahead of the coming general elections.
On his part, the Senator representing Benue North West district, Senator Orker Jev said PDP remained the only hope for Nigerians stressing that on several occasions the APC had approached him to join them but he turned them down because he could not see himself as a member of a party that did not mean well for his people.
Welcoming the defectors Governor Samuel Ortom assured them of equal opportunities with other members of the party stressing that the people of Benue state had in unison rejected the APC because the party had failed Nigerians in all spheres of human endeavor.
He urged Nigerians to rally round the PDP and ensure that the party returned to power at the federal level in 2023 in order to take the country out of the economic woes the APC had plunged the country into.
Chairman of the PDP, Sir John Ngbede while receiving the defectors said the party would ensure that they enjoyed every privilege availed old members of the party.
The highpoint of the ceremony was the burning of the APC registration cards of the defectors and over 200 nomination forms bought during the Ward Congresses of the APC.
Top Stories