How MASSOB Leader, Uwazuruike Ejected Me From His House For Refusing To Date Him — Female Tenant Cries Out


Okpala also claimed the MASSOB leader seized her belongings and kept them in one of his stores after he had instructed his caretaker, identified as Mr Okey to lock her room. 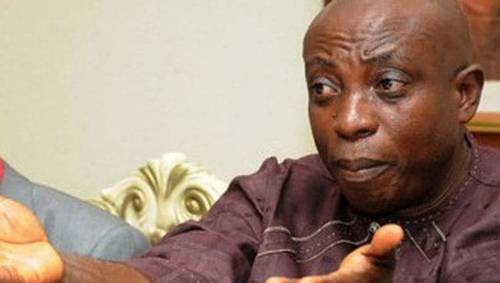 Loveth Okpala, a female tenant,  has accused the leader of the Movement of the Actualization of the Sovereign State of Biafra (MASSOB), Ralph Uwazuruike of ejecting her from his house after declining to meet him at an unusual place for an unknown reason.

Okpala also claimed the MASSOB leader seized her belongings and kept them in one of his stores after he had instructed his caretaker, identified as Mr Okey to lock her room.

Uwazuruike’s tenant explained that trouble started when she went out during the weekend and left her air conditioner on.

Ms Okpala, residing at Uwazuruike Close, Works Layout, Bala Suya, Owerri, Imo State, revealed this to SaharaReporters on Wednesday adding that the MASSOB leader also lied that she had not paid her rent.

“My name is Loveth Okpala. I’m a tenant in Mr Ralph Uwazuruike’s house. There was a clash between my landlord and me because I left my air conditioner on when I was not around. Nobody was around. He found out and I pleaded with him that it wasn’t intentional. I told him that I left my key with one of my friends. It was my friend that left my room without switching off the AC. She said when there was a blackout, she forgot to switch off the AC before she went out. So, I begged him.

“This whole issue happened on Sunday, so when I came back, I realised the AC cable had been cut and my room locked. So, I went to see the caretaker and begged him. The caretaker said I should go and beg my landlord, Mr Uwazuruike, not him. The caretaker, Mr Okey advised me to get my landlord’s number, call and beg him.

“Immediately, I called him and introduced myself that I was the girl whose AC was left on while away and that my room had been locked. He just hung up on me. The caretaker advised me again to send a message to him on WhatsApp, that he might be busy. I did and he replied that I was going to pay a fine.

“I begged him that I didn’t have money and that he should just forgive me. He blocked me for a while on WhatsApp. I had to go and sleep at my friend's place around Port Harcourt Road that Sunday night. When I discovered he had unblocked me, I pleaded with him again. He replied that I should tell Mr Okey to open my room for me,” Ms Okpala said.

She thought the storm was over.

But Uwazuruike on Monday asked that they should meet but she ignored it. She disclosed that the pro-Biafra leader wanted to pick her up but she told him about the sit-at-home order of the Indigenous People of Biafra (IPOB) in the state (which has already been reviewed by IPOB)."

She continued, “He chatted me up again on Monday asking if he could invite me. I said but there was no movement because of the sit-at-home order. He said there was movement, that he could come and pick me up with his car. He said I should meet him at the Bala Suya area to pick me up. I said I couldn’t come there and asked if we could make it Tuesday.

“I got to my lodge on Tuesday and the caretaker said Mr. Uwazuruike had not ordered him to open my room. He called him in my presence and he said he should open the door for me. He chatted with me again to remind me of the meeting but because I was tired and not interested, I ignored him.

“I went downstairs after that and stayed with another friend and before I went upstairs again to my room, it had been locked with another key. I went straight to the caretaker and he said the landlord asked him to lock my room again because I had not paid my rent.

“I was shocked and told him that how would I be staying in their apartment without paying and they would not talk all this while. The rent had been paid eight months earlier. I even reminded him of how I paid and gave the receipt to him. When he started an argument. I told him I would go to the bank the next day to see what happened when he was saying he didn’t get my payment. I paid on the 22nd February, 2021.

“He didn’t allow me to sleep in my room that night again so I went to sleep downstairs with a friend. The next morning when I was preparing to go to the bank, Mr Okey came with another man and he asked me to follow him to my room upstairs. Getting there, he opened with their key and told me that Mr Uwazuruike said I should leave. He said he didn’t want to see me again and anybody that harboured me would be sent out, too.”

Ms Okpala who could not control her tears when speaking to SaharaReporters said she had not had access to her rented room and her belongings since then. She lamented that Uwazuruike threatened that she should accept whatever happened to her if she stepped into his compound again.

“I was asking questions. How? Where is it done? You are sending me out for what? You said I hadn’t paid, and I told you I would go to the bank, and next thing you’re asking me to move out. Is it all because he wanted me to go out with him and I refused? He collected my key from me, opened the door, and started moving my things out.

“Mr Okey said that Mr Uwazuruike ordered that even if I had paid my rent, he didn’t want to see me again in his house and that he would give me the balance of my rent. Everybody in the compound advised me to quickly get to the bank and get the statement which was proof of my payment and I quickly dashed out to do so.

“To make the matter worse, I received a call on the way from Mr Okey that Mr Uwazuruike said I should never step my foot in that house again. He said I will have myself to blame for anything that happens to me if I come into that house. My belongings are kept in a store in his house,” she said while sobbing.