Many petrol stations in the town were still under lock and key since Thursday when President Muhammadu Buhari visited the South-East state. 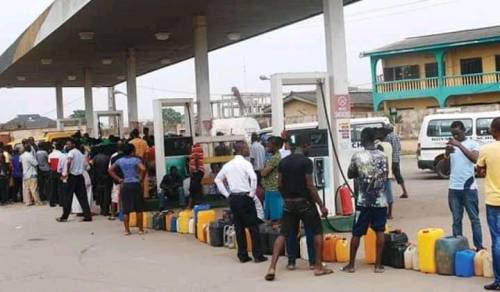 It has been revealed that some long queues surfaced at several filling stations in the heartland city of Owerri, Imo State capital on Saturday.

This is as some filling stations were selling petrol between N250 to N300 per litre.

According to Daily Post, many petrol stations in the town were still under lock and key since Thursday when President Muhammadu Buhari visited the South-East state to commission a number of projects.

A motorist, Emaka Opara, lamented the situation and urged government to find a lasting solution to the problem of fuel scarcity.

“The government should find a lasting solution to this particular issue because we can’t keep on going this way every time,’’ she said.

At the NNPC filling station at Onitsha Road and few others, motorists queued to buy fuel.

The scarcity has caused untold hardship to residents of the state.

The same scenario played out at Amakohia area as most petrol stations were closed and the few were selling as high as N300 per litre.

“Though some of us do not have, others prefer to sell to black marketers since they would make more profit,” he said.

Recall that filling Stations operating in Owerri, had earlier shut down their businesses to protest the refusal of payment of compensation to one of their members whose filling station was damaged by former Governor Rochas Okorocha’s administration.