IPOB has accused security operatives of killing innocent Igbo youths and lying that ESN is responsible. 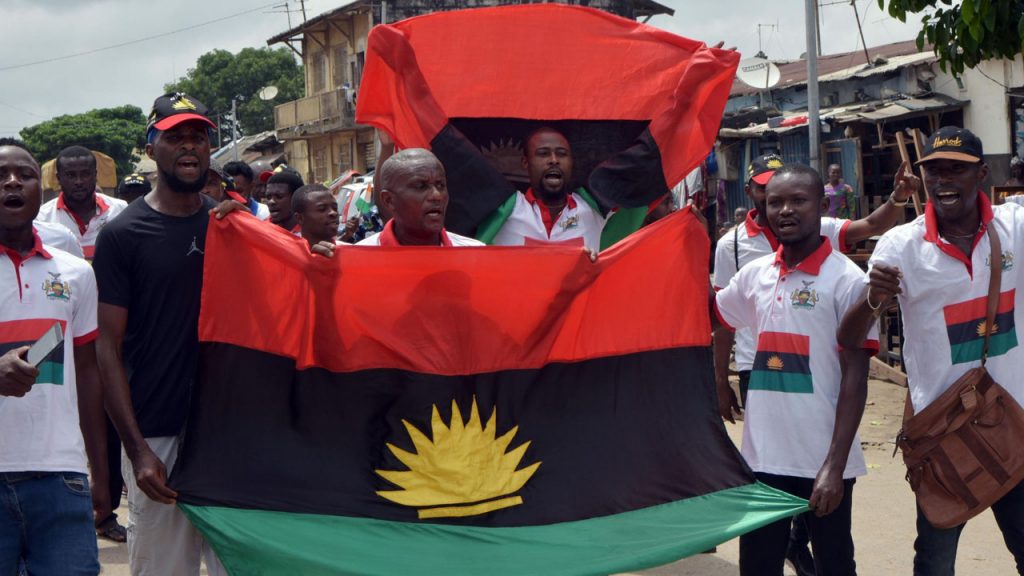 IPOB
The Indigenous People of Biafra, IPOB, has accused Ohanaeze Ndigbo and politicians from the south east of betraying people of the region.
This comes as the group accused security agents in the Southeast to of “genocidal killings” of Igbo youths, then turn around to accuse Eastern Security Network of being responsible.
IPOB claimed several Igbo youths have been killed by security agents due to the quest by political leaders and Ohanaeze Ndigbo’s quest for “political glory.”
In a statement by its spokesman, Emma Powerful on Monday, IPOB accused Ohanaeze and Igbo political leaders of betraying the Southeast.
According to Powerful: “Following the incessant kidnappings, harassment, arrests, and indiscriminate killings of Biafrans in the recent times, we the Indigenous People of Biafra (IPOB) ably led by our liberator and indefatigable leader, Mazi Nnamdi Kanu, wish to warn Fulani-dominated Nigeria security agencies operating in Biafra land to desist from provocative killings of innocent Biafran youths whom they tag operatives of the Eastern Security Network, ESN, and IPOB volunteers.
“Several innocent Biafrans especially our youths have lost their lives in the hands of these mindless and compromised Nigeria security agents in Biafra land all because our political leaders and Ohaneze Ndigbo in their quest for personal political gains betrayed us before the Fulani controlled federal government.
“Imo and Ebonyi states commissioners of police must stop parading and killing of innocent youths of the two states as ESN and IPOB volunteers because we are not looking for any of them, since the formation of ESN outfit on December 12 last year police and army could only kill Ikonso because his village people set him up because of envy and jealousy, no other person in the outfit was killed.
“We are, therefore, warning those behind this barbarity to leave our land and entrust the security of our land in the hands of IPOB volunteers and ESN security outfit. Our patriotic volunteers are not compromised but ever ready to defend our people against Fulani invaders.
“Again, we strongly condemn the continued parading of youths in Biafra land by security agencies labelling them as IPOB and ESN commanders. There were no ESN operatives or IPOB volunteers caught in Imo State and Ebonyi State. The police must stop dishing out falsehood to the public in order to attract praises from gullible Nigerians.”
Top Stories